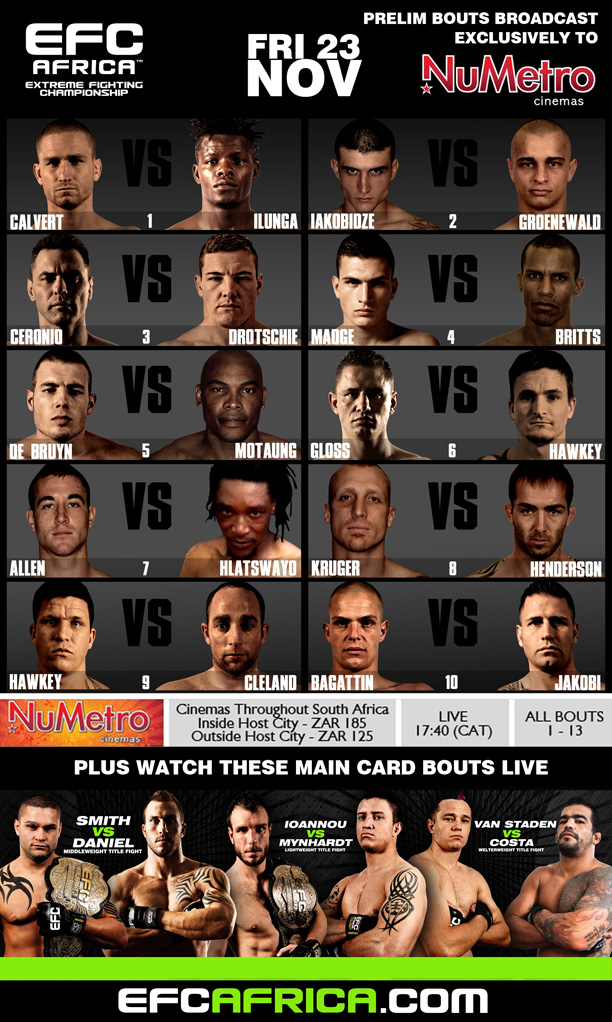 Johannesburg (South Africa) – If you can’t make it to Carnival City to watch the biggest MMA event of the year, don’t despair. You can still have your larger than life EFC AFRICA 17 experience. Nu Metro cinemas across South Africa are broadcasting all thirteen fights live on Friday 23 November!

These are the ten exciting bouts that are being broadcast exclusively to Nu Metro cinemas:

DONAVIN HAWKEY vs. LIAM CLELAND
In a classic clash of styles, expect a skill-filled treat from these two middleweights.

JP KRUGER vs. WADE HENDERSON
Both middleweights are on hot winning streaks and now looking to climb one step closer to a title shot.

BOYD ALLEN vs. AMOS HLATSHWAYO
Allen, who is on a four fight winning streak, welcomes newcomer Hlatshwayo to the big time.

LEO GLOSS vs. WESLEY HAWKEY
Two crowd pleasers and former contenders clash when the ‘King’ takes on ‘The Young Assassin’ in this highly anticipated showdown.

ARMAND DE BRUYN vs. PETE MOTAUNG
The Judo practitioner from Durban takes on the striking champion from Johannesburg.

DON MADGE vs. HECTOR BRITTS
‘The Magic Man’ is back to face a leaner, meaner Britts in this awaited lightweight clash.

FRANCOIS GROENEWALD vs. KOBA IAKOBIDZE
Two rising athletes, the submission specialist versus the boxer, looking to make their mark in the featherweight division.

The live EFC AFRICA 17 broadcast to Nu Metro cinemas will commence at 17:40 and includes all thirteen bouts. The broadcast culminates in the final three main card bouts, which includes the battle for the middleweight and lightweight championships.