Stars Give Their Predictions 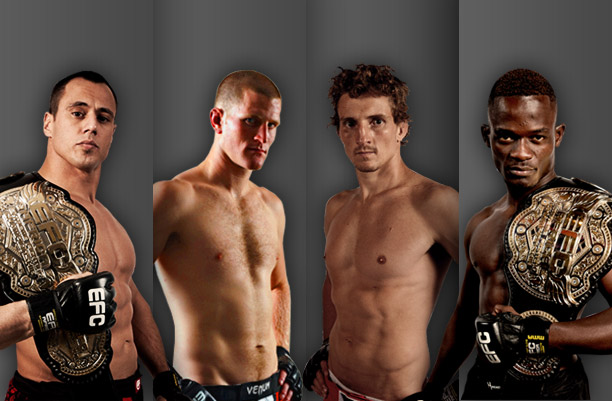 Johannesburg (South Africa) – The countdown to the last MMA showcase of the year, EFC AFRICA 17, has begun, and it features a star studded fight card. Middleweight champion Jeremy Smith takes on the most explosive fighter on the continent, Darren Daniel. Plus Greek fighting sensation Costa Ioannou clashes with fearsome striker Leon Mynhardt.

A number of EFC AFRICA star athletes gave their personal opinions and predicitons on the two title bouts, as well as the highly anticipated bout between Martin van Staden and Jadyson Costa. Fans across the world will watch these epic clashes unfold, presented by MusclePharm, broadcasting live from the Big Top Arena at Carnival City on 23 November.

Smith vs. Daniel
“Depends on who can implement their game plan the best! If Daniel comes out flying in the 1st round, he stands a good chance of taking it! But I think the longer the fight goes on the stronger Jeremy will get! I’ll give it to Daniel in the 1st round by TKO.”

Ioannou vs. Mynhardt
“Leon, Leon, Leon, Leon! This is going to be Ioannou’s most challenging fight, most probably fight of the night! Leon will win by KO at the end of the 2nd round.”

Van Staden vs. Costa
“This is an interesting one. I have fought both of them! I think that Martin will be able to dominate physically, and if he does not make a stupid mistake he will be able to pull off the victory! Martin will win by way of G’nP.”

Smith vs. Daniel
“Now this is the tough one to call. It’s the explosive athleticism of Darren Daniel versus the sheer toughness and never-say-die determination of Jeremy Smith. Darren’s explosive attack is more than capable of ending this encounter within the first two rounds, but if Jeremy is able to initiate the attack and neutralise or absorb Mr Daniel’s attacks and drag this fight out, I see the title staying where it is. Not an easy thing to choose because anything can happen in MMA, but I think that Jeremy’s experience will be the deciding factor here.”

Ioannou vs. Mynhardt
“This is a big fight for Leon and having trained with him for this one, I know that he is aware of what he needs to do to take this one. Costa is a stubborn opponent and he will come prepared, but if Leon executes his game plan and keeps it standing, I don’t see this one going past round 3. Leon by way of TKO in round 3.”

Van Staden vs. Costa
“I think Jadyson will be coming into this fight wanting to redeem himself so he should come out attacking, which Martin will welcome. If Jadyson however, is able to put this one to the canvas, I don’t see Martin lasting. Jadyson will win by submission in round 2.

Smith vs. Daniel
“Darren is honestly the most gifted athlete I’ve ever met. He is more dedicated than ever and one of the best fighters in EFC AFRICA. I believe he will dominate Jeremy on every level and he will be the new champion without a doubt.”

Ioannou vs. Mynhardt
“Two of my favourite fighters, who I have absolutely the most respect for. They are both great stand-up fighters, but when it comes to the ground, Costa has the advantage and I am sure he will make the most of it. When the fight goes to the ground, it will only be a matter of time. Costa will win by TKO or submission.”

Van Staden vs. Costa
“I believe that Martin is a better stand-up fighter than Costa. With Costa being a black belt in BJJ one would assume he has a better ground game, but from his last fight however, a few holes were visible in his game after Opperman put pressure on him. Martin will also apply pressure, which I believe will break him. Martin will win by KO or decision.”

Smith vs. Daniel
“Well, this is going to be my FOTN with these two great fighters. Daniel showed he has what it takes to be the champ and is a well conditioned all rounder surrounded by a great camp full of top middleweights. I must be honest, I am more interested to see what ‘Soldierboy’ will do if ‘Doube D’ takes the title. Then there is the champ, Smith holds a very impressive fight record against top local and international fighters. He too comes from a top camp and is very well rounded. I think that Smith will take this via gruelling 5 round decision.”

Ioannou vs. Mynhardt
“This will be a tough title defence for Costa. Leon is one tough dude who is arguably one of the best strikers in EFC AFRICA and his ground game has come on leaps and bounds. Leon may just be the champs Achilles heel on this occasion. Costa is a smart fighter and I believe he will avoid a slug fest with Leon as he does not possess the same punching power. I believe Costa will take him down and grind out the win with a majority decision victory, or get the neck in the later rounds 4 or 5.”

Van Staden vs. Costa
“This is a great match-up and a wonderful opportunity for the former champ to redeem himself quickly and get back on top. Martin is one of SA most experienced MMA fighters with a solid fight record. His height and reach will give him the opportunity to try and deliver his game plan. Jadyson will be coming out with a new mind set and will not rest on his laurels. I believe that Martin may stand a chance to grind out a 3 round decision, but I feel that Martin lacks KO power and will be completely outclassed on the ground. Jadyson Costa by submission in round 1.”