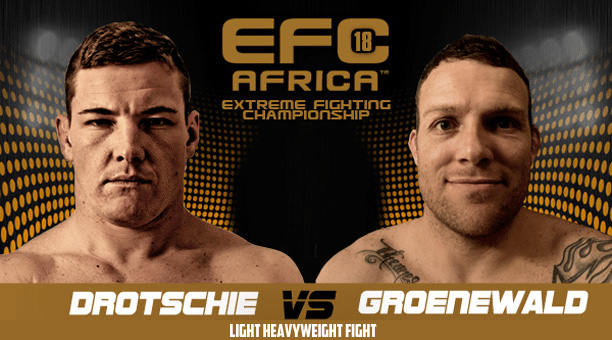 Cape Town’s Drotschie showed his steel at EFC AFRICA 16 when he dispatched of Lance Ceronio in the first round with a rear naked choke. “I heard that Brendon has a good ground game so the fans can expect one of two things – it will either be a tussle on the ground that will rock the arena or it will be a fight where I can hopefully test my stand-up skills,” says Drotschie.

Groenewald, the BJJ expert from Cape Town, made his EFC AFRICA debut at 16 where he submitted Sors Grobbelaar at heavyweight. Now making the cut down to light heavyweight, Groenewald looks to make an impact on the division. “It’s going to be interesting. As I understand it we are both ground fighters and both come from excellent camps with top trainers, in fact, the two best in Africa with Rico and David Levey. I’m not one to make predictions so I’m not going to. Gideon has the potential to become a champion so I wish him the best in all he does. I’m willing to die for a win, but I’m pretty sure Gideon is too, so good luck, fight hard and may the force be with you,” says Groenewald.

EFC AFRICA 18, presented by MusclePharm, takes place at the Carnival City Big Top Arena on 1 March 2013. Tickets on sale at Computicket www.computicket.com and tickets for the live broadcast to Nu Metro Cinemas available at www.numetro.com