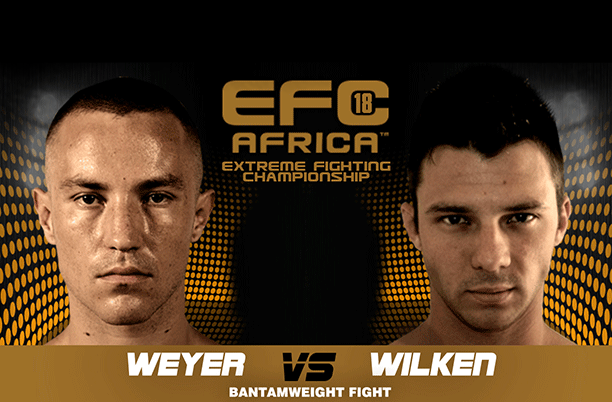 With only one professional fight to his name, Weyer previously fought at featherweight where he lost to two-time title contender Leo Gloss on points, taking Gloss the full 15 minutes, winning Fight of the Night and making one of the most talked about debuts in African MMA history.

After sitting out since EFC AFRICA 09 due to a back injury, Weyer now relishes the chance to get back into the Hexagon. “I am hungry! I have been out for well over a year watching EFC AFRICA grow huge, and now I’m physically fitter than ever before,” said Weyer. “The bantamweight division will have a lot of new faces, including Donnovan, but they lack my experience of a 3 round war against arguably the toughest opponent in the promotion. Plus I know what I want and it isn’t a handshake and a ‘thanks for fighting’, it’s a big golden belt!”

Although making his professional debut, Wilken has racked up an impressive 3 year, 13 fight amateur MMA record, and believes competing professionally is his calling. “I started MMA because of EFC AFRICA, and this is a dream come true,” said eager newcomer. “In amateurs I fought guys who were consistently bigger, where this is my natural weight. You only get this opportunity once; we are starting an entire new division.”

Training with EFC AFRICA stars Nolan Swanepoel, Victor Temlett and Tyron Rightford, ‘The Warrior’ recons he has all his bases covered and is ready for the big time. “I describe myself as 100% ground and 100% stand-up. I have been warned about the overwhelming experience of the EFC AFRICA Hexagon but that’s what I thrive on! I feel that I have what it takes to be a champion, in and outside the cage. I am certain that I was born for this.”