Two brothers fighting on the main card for the first time in history. Here’s a behind the scenes look at what brother brings to brother in training. 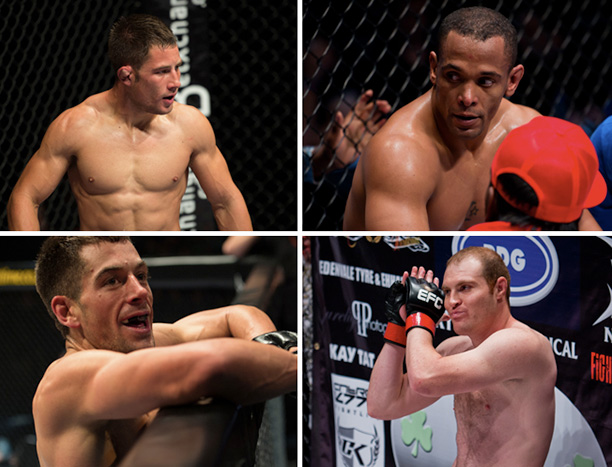 “It’s awesome having brothers that share the same passion for a sport we all love so much,” says David, “it pushes me harder and makes us a lot stronger. No one ever wants to be left behind!” “When you waking up at 4:30 every morning to do your cardio or strength session it’s a lot easier if you have someone with you,” adds Gareth.

The brothers recently took the decision to change gyms, moving from Shido Fighting Systems under Arno Pienaar to Rory Diesel’s World of Warriors. “We train a lot of wrestling now with Jacques Rossouw,” says David. “Lots of jits with Warren King, boxing with Sebastian Rothman and of course Rory who rounds our whole MMA game off, including strength, conditioning and managing our weight cut.”

The move has given the brothers access to a whole new stable of sparring partners, but both admit that the odd opportunity to get in the ring with each other still presents itself.

“In previous camps I needed to help Dave prepare,” remembers Gareth, “he’s much bigger so he always seemed to get the upper hand.” “It gets a bit heated in sparring sometimes,” adds David. “I’m always wary of the big overhand right the mad man throws but we normally come out pretty even … except for the fact that I’ve got loads of reach on him. But, he’s unbelievably strong when it comes to grappling!”

With three brothers in the fight game, David, Gareth and youngest sibling Matt, mother Buirski must have a tough time dealing with her sons thriving in harm’s way.

“She’s getting a lot better but she can still hardly watch it,” laughs David. “She’ll normally get a running commentary via texts from our girlfriends.” “I think she sees all the positive aspects of MMA,” says Gareth, “she doesn’t just see it as fighting anymore but rather a sport that requires loads of commitment, dedication and sacrifice.”

The brothers are known for their fitness with both achieving third round wins in EFC AFRICA and neither showing any signs of fatigue. So, who’s the fittest Buirski around? “I’d have to say Gareth,” says David. “The little big man’s a cardio machine! He can go for days without any rest, it’s unbelievable.” “We’re constantly competing with each other,” adds the younger brother.

David and Tyron Rightford recently had a media word war, with Rightford attacking the older Buirski’s fighting style and David responding with the promise of a proper beat down. What are Gareth’s thoughts on his opponent, the submissions specialist and champion Abdul Hassan? “I’ve never been this strong and ready for a fight,” he says. “My plan is to use my strengths, to control the fight and not worry too much about getting into a BJJ match with Abdul. I’m going to move around and punch him really hard from every position in that cage! I hope he’s ready for war!”