Chris ‘Danger’ Du Pont has never gone the distance and predicts a quick finish for his debut fight with Ian Visser. 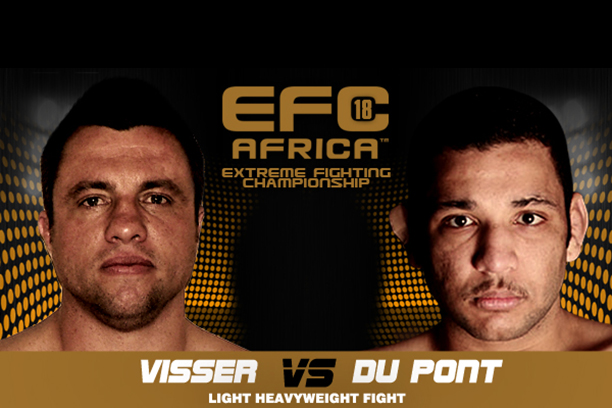 Currently training at Panther Fighting Arts under head coach Anthony Kettle and alongside fellow EFC AFRICA athlete Alain Ilunga, Du Pont is ready to make the hexagon his own. “Ian looks like a strong, heavy-handed striker and despite having SA wrestling colours I’m still looking forward to fighting him,” he says.

While the two fighters score cards are on a similar level, an age gap of 13 years separates them, a factor that Du Pont discounts out of hand. “In this game I honestly believe age is nothing. Ian would never have taken the fight if he thought it would be a factor.” “He’s coming back from a loss so he’s going to be fighting with a vengeance,” adds Du Pont. “I’m prepared for everything and anything he throws at me. I’ve never gone the distance and I don’t plan to any time soon. I finish my opponents!”

With another light heavyweight bout taking place at EFC AFRICA 18, both Visser and Groenewald making the drop to light heavy from heavy, this once under populated division is poised for upheaval, a prospect that Du Pont relishes.

“EFC baby!” he says. “This has been my dream for so long. I’ve got a date with the light heavyweight champion, whoever he may be when I get there. Good luck to Ian, and bring on the war!”