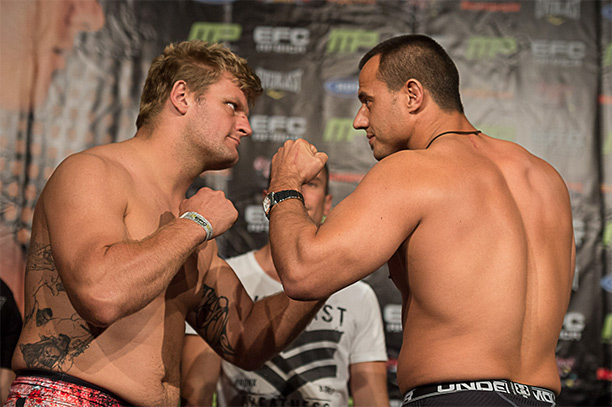 Johannesburg (South Africa) – A capacity crowd filled Carnival City’s Mardi Gras Theatre for today’s official weigh-in ahead of EFC AFRICA 18 tomorrow, 1 March. Fans got what they were looking for with intense stare-downs, a near fist explosion, spectacular call-outs and a gentlemanly handshake to round it all off. Judging by the intensity of the athletes, the total focus and the energy crackling in the room, tomorrow night’s event is ready to burn.

The event began with a large section of the crowd calling out their support for Ricky ‘The Apocalypse’ Misholas, asking for a title shot for him and baying when he finally made an appearance toward the end of the card.

Only one fighter failed to make weight, light heavyweight Tumelo Maphutha, who came in at 93.7kg and therefore has two hours to drop the weight. (Maphutha has since made weight, coming in at 92.9kg.)

Sparks flew when Ricky Misholas and Sors Grobbelaar squared off against each other, no doubt influenced by Ricky’s vocal audience, with Sors pushing his head hard into his opponents’.

Controversy continued as Tyron ‘The Rush’ Rightford took the stage, opened his gi and sent a sack of loose potatoes spilling to the floor in a clear response to trash talk from David Buirski earlier in the week. The square off was civil, but ominous as The Rush maintained an intense calm.

Brother Gareth Buirski followed, his matchup with Abdul ‘Hollywood’ Hassan having had just as much trash talk traded in the week’s lead up, and the two threated to lay into each other with security needed to hold them apart. If the prelim bouts were looking dangerous, the main card holds fatal promise.

Finally the champion and the contender, Ruan ‘Fangzz’ Potts and Andrew ‘One Gear’ van Zyl, entered the arena. Both made weight and both were happy to shake hands, a gesture in direct contrast to the reality of the biggest heavyweight clash the African continent has ever seen looming over them both.

See a video of the weigh-in event here: http://youtu.be/ZIQb_GSE7SU