The ‘Headless Chicken’ responds to rantings from ‘The Rush’. 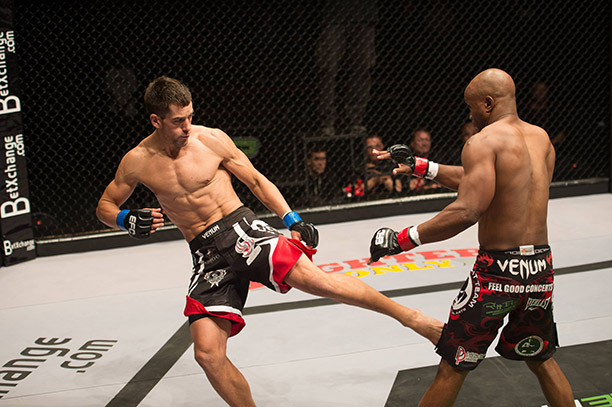 Johannesburg (South Africa) – On Monday 18 February Tyron ‘The Rush’ Rightford had his say regarding his opponent at EFC AFRICA 18, comparing David Buirski’s fighting style to that of ‘a headless chicken’, and stating that he believes Buirski has only ‘half the hand speed’ of his sparring partners, adding that ‘there’s no way he’ll keep it standing’. In this exclusive interview Buirski replies.

“Let’s set the record straight,” he begins, “first, I’m 3-1 as a pro and 8-0 as an amateur, so I think I’d have a slight advantage when it comes to cage time and experience, not that it matters.”*

“Second,” he continues, “regarding my hand speed and tactics … that’s great. If he thinks I’m worried to stand with him … I’ve knocked out guys double his size and been hit hard by guys twice his size. I have never been finished in my MMA career so hats off to him if he thinks he can do it.” “Let’s hope he is fit and strong, like he says, because this headless chicken is in the best shape of his life and is going to be controlling the pace and pushing from the first second.”

“I’ve got loads of respect for all my opponents,” he continues, “and Tyron, but I’m coming in there to beat him up good and proper. I’m going to show him how hard work, discipline and sheer will to win pays off.”

Before Rightford’s public sledging Buirski had this to say of his opponent:

“I think Tyron is a great fighter and an awesome challenge for me. I have great respect for all my opponents because I know we are going through exactly the same things. It takes a special, strong-minded person to do what we do!”

It seems that for this fight, come March 1, the gloves are definitely off.

“I have never had this kind of training,” says Buirski. “It’s been a long, hard three months. I cannot wait to get in there.”

*Buirski’s record is currently being updated by EFC AFRICA.