Make sure you don’t miss any of the action! 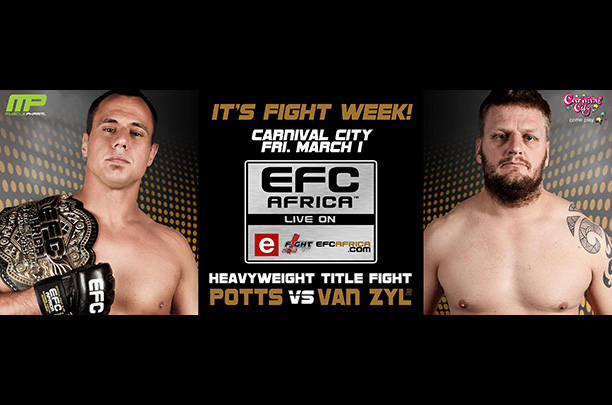 Johannesburg (South Africa) – On Friday the most dangerous man on the continent, heavyweight champion Ruan ‘Fangzz’ Potts, clashes with iron-jawed Andrew ‘One Gear’ van Zyl, in the highly anticipated rematch for Africa’s most coveted belt.

In the build-up to the huge event there are a number of things not to miss, this is what to keep a look out for (times and details may vary):

Thursday – 13:45 (CAT)
Official weigh-in for EFC AFRICA 18 – Get the adrenaline pumping for fight night by watching the live weigh-in, taking place at the Mardi Gras Theatre. Entrance is free. Come and support the athletes and feel the tension as they stare-down during their face-offs.

Friday – 23:00 (CAT)
EFC AFRICA 18 goes live across the globe as the first of the three main card bouts begin.