For Potts There Is Nothing But Victory 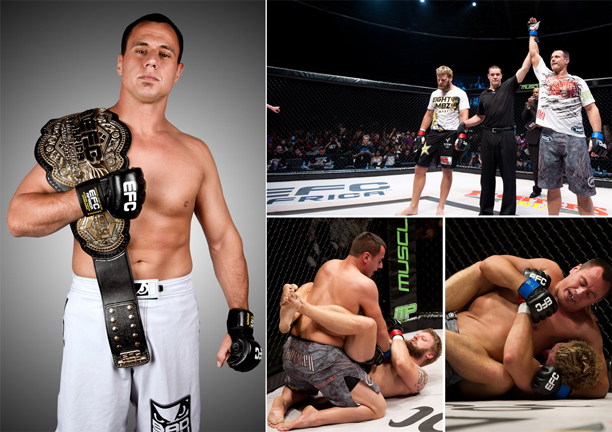 Johannesburg (South Africa) – On 1 March Ruan ‘Fangzz’ Potts defends his EFC AFRICA heavyweight title for the third time, his second against challenger Andrew ‘One Gear’ van Zyl. Potts is a champion beyond doubt, an undefeated fighter, and in this interview has a few ominous words for his opponent.

HOW IS YOUR TRAINING PROGRESSING?

I’ve been in camp for three months. It’s flown by and now there’s only a few days left till the big night.

IS THERE ANYTHING NEW ABOUT THIS CAMP THAT YOU HAVEN’T TRIED BEFORE?

I have added an element to my fight camp this time around by adding Mark Robinson (a South African legend in MMA) as my grappling coach. He has sharpened my grappling and ground skills to a whole new level.

WHO ELSE ARE YOU USING FOR YOUR PREPARATIONS?

I am using Mark Robinson and his team and continue to use David Dornbrack, Rupert van Aswegen and Team RDG.

IT’S BEEN SPECULATED THAT VAN ZYL WILL BE LOOKING TO KEEP THE FIGHT STANDING FOR AS LONG AS POSSIBLE, EVEN THAT A KNOCKOUT MAY BE IN THE OFFING. CAN YOU COMMENT ON WHERE YOU’D LIKE THE FIGHT TO GO?

IN HIS CURRENT INTERVIEW WITH FIGHTER’S ONLY, VAN ZYL INTIMATES THAT A KEY TO TAKING THE FIGHT WILL BE TO PUSH IT INTO THE LATER ROUNDS, SAYING THAT HE KNOWS HE LACKS YOUR STRENGTH BUT BELIEVES HIS GAS TANK CAN OUTLAST YOURS. HOW WOULD YOU FEEL ABOUT A FIGHT THAT WENT THE DISTANCE?

I strongly doubt the fight will go the distance but as I said before, I have prepared for a five round slugfest, so let’s see at which round the gas tanks will empty, and who outlasts who.

WHAT DO YOU EXPECT FROM VAN ZYL, A FIGHTER WHO LOST TO YOU AND THEN RE-ESTABLISHED HIMSELF WITH TWO EMPHATIC VICTORIES?

I expect Andrew to come into this fight in good condition and well prepared for a fight. The question is which Ruan “FANGZZ” Potts will be in the ring this time? What will Andrew be prepared for?

DO YOU BELIEVE HE IS A BIGGER THREAT THIS TIME AROUND?

For me, being the EFC AFRICA heavyweight titleholder, every challenger is a threat and every fight is a challenge.

HOW DO YOU THINK HE HAS GROWN AS A FIGHTER?

I think he has a bit more experience than last time we met but whether he has what it takes to take the title from me is yet to be seen.

WITH YOUR UNBEATEN STREAK CONTINUING TO BUILD DOES THE THOUGHT THAT SURELY, SOMETIME THE STREAK MUST END, ADD PRESSURE?

SHOULD THIS FIGHT END IN VICTORY, WHAT ARE YOUR PLANS FROM THERE?

After my victory I will take a week or so off to spend some quality time with my family and then I will return to training and my day job.

FOR SOMEONE THAT’S BEEN ON TOP FOR SO LONG IT’S HARD TO IMAGINE YOU BEING ANYTHING OTHER THAN CHAMPION. CAN YOU IMAGINE AN OUTCOME WHERE YOU ARE DEFEATED, NO LONGER THE HOLDER OF THE BELT?

I will always train my hardest to prepare myself for victory. I intend to hold the belt until such a time that I relinquish my title and let the next generation continue my legacy.

WHAT SORT OF AN EFFECT DO YOU THINK A LOSS WOULD HAVE ON YOU AS A FIGHTER?

A true champion stays humble in victory or defeat.

DO YOU HAVE ANY WORDS FOR ANDREW?

I wish Andrew well for this fight and hope he has prepared well so that we can give the crowd and fans a fight to remember.

I would just like to add that during our last encounter I won despite breaking my hand with the first punch of the fight. This time however I have the use of both my hands. Let’s see if this ups the stakes.