The Clash Of The Heavyweights

At EFC AFRICA 18 six heavyweights will take to the hexagon, all of them with an eye on ultimate glory. 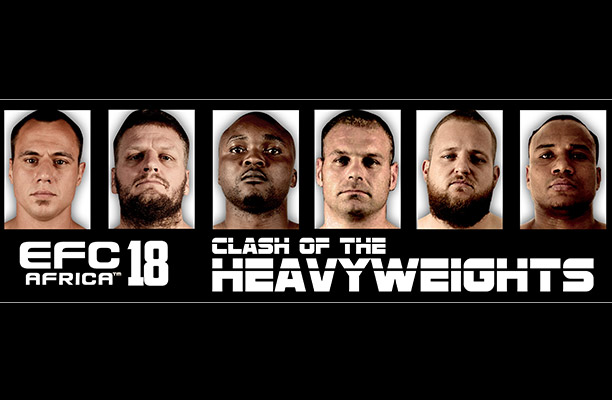 Johannesburg (South Africa) – On March 1 Ruan Potts will defend his title against undisputed heavyweight challenger Andrew van Zyl. On the undercard two more heavyweight clashes will take place: Wilhelm ‘Tiny’ Strauss will take on newcomer Christophe ‘Bomaye’ Walravens and Ricky ‘Apocalypse’ Misholas will rumble with Sors ‘Guru’ Grobbelaar. In one night the EFC AFRICA heavyweight landscape is set to explode, to shift radically, and to reveal a whole new set of title challengers.

Slated fifth on the prelim card the Strauss versus Walravens battle will be crucial. ‘Tiny’ is the tallest heavyweight in the organisation, the only heavyweight athlete that needs to cut weight to make it, and is an ex-bouncer with years of street side brawl experience. Having lost both of his previous EFC AFRICA appearances Strauss is aware that this fight could very well be his last in the hexagon.
“This is do or die for me,” he says. “A win means I continue on this journey, a loss means I need a serious rethink.”

For Walravens the opportunity to prove his skills is equally as huge. A national Judo champion originating from the Democratic Republic of Congo he has some pro boxing experience but boasts only one cage appearance, a victory by round one TKO. March 1 will be his trial by fire.
“I have watched Tiny’s fights,” he says. “He is nothing short of great. I am calm and I can’t wait for my debut. I will be putting my heart and blood into the fight.”

The struggle between Misholas and Grobbelaar is a chance at vindication for both.

Grobbelaar entered the EFC AFRICA hexagon with a string of high-profile international stand-up bouts to his name but was quickly submitted by Brendan Groenewald at EFC AFRICA 18 – an intense awakening to the demands of MMA.
“It’s baby steps,” he says of the experience. “I am a student of what we do and will stay one till the day I die. I got greedy, I didn’t think, but that’s how we learn. I won’t be making the same mistakes.”

For Misholas there is no time for slow lessons. At EFC AFRICA 13 he suffered a shock loss to the sledgehammer punches of Egyptian Mahmoud Hassan and has been battling to regain his title contender status since. He hammered Wilhelm Strauss with a round one KO at EFC AFRICA 16 and is nowhere near finished.
“He can expect a war,” are his words to Grobbelaar, “he better be ready to handle it.”

Where do these four warriors think the title will rest at the end of the night?

“I have no predictions,” says Misholas. “The fans should be buying their tickets now because in the Apocalypse they will see what’s to come for the title holder, whoever he will be.”

Strauss is equally distant. “I want a shot at Ricky again,” he says. “He’s the only man to ever have dropped me. After that, we’ll see.”

“It’s going to be a good fight,” says Grobbelaar. “Ruan knows it gets harder with each defence and Andy needs to redeem himself. As for me, I’m really happy to be fighting Ricky. I’ve wanted to face him for a long time. After that, I’ll fight anyone.”

“I am a man on a mission to get that belt,” says Walravens, “that is my ultimate goal. I say let the best man win.”

Whatever happens, the heavyweight division is set to fire come fight night.