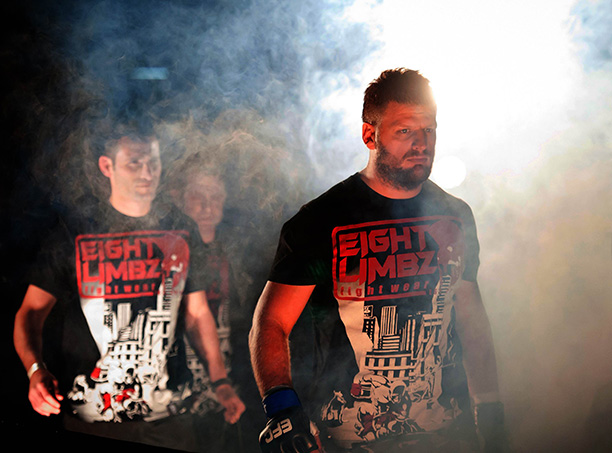 Johannesburg (South Africa) – On March 1 the biggest African heavyweight clash to date is set to take place at Carnival City. Ruan ‘Fangzz’ Potts takes on Andrew ‘One Gear’ Van Zyl in a matchup billed as a chance at redemption. Potts is the undisputed heavyweight champion, van Zyl is the only other African fighter that comes close to such a claim. Potts is undefeated, van Zyl has lost only once – to Potts himself. With just over a week to fight night van Zyl and coach Bobby Karagiannidis share their thoughts on the coming bout:

How is your training progressing? Is there anything new about this fight camp that you haven’t tried before?

Andrew: The training camp has been pretty standard. We’re obviously working on a plan to capitalize on gaps in Ruan’s game.
Bobby: We’ve had a great camp.

It’s been said that you are putting a lot of work you’re your stand up for this fight. Can you comment on that? Will keeping the fight standing be a specific goal?

Andrew: A fight isn’t something you can apply an exact formula to, there will be a bit of everything I’m sure.
Bobby: It would be naive to think that the fight won’t go to ground. We have been working on all aspects. Striking, clinch and ground so that Andrew is prepared for all situations.

It’s been said that this time you will be looking to take your time and build the fight, possibly going the full five rounds? Would a decision victory be a goal for you?

Andrew: I’m there to exploit what I can. I’m no boring fighter, I’m bringing it. If he can last 25 minutes then so be it!
Bobby: As they say in MMA, you don’t get paid for overtime. Andrew is always looking to finish the fight.

How are you a different fighter now to what you were the last time you faced Ruan? Could you talk about aspects of your game that you feel have improved?

Andrew: I am more experienced, more composed and I am mentally focused.
Bobby: Andrew is more technical and a lot stronger. He has now had championship fight experience so he is more relaxed than last time.

Is there anything you’ve specifically identified that you will avoid doing when you enter the Hexagon this time round? Any specific lessons learned from previous encounters, Ruan in particular?

Andrew: I’m not going to lose!
Bobby: Stay relaxed and enjoy the occasion because Andrew is one of the lucky few to have this opportunity.

What is your specific goal for this fight? Something that you’d like to see Andrew achieve, perhaps a personal development or goal rather than simply a win?

Bobby: I want to see Andrew fight to his potential and give the fans a good fight. He must walk out of the cage knowing he left it all in there.

In your Fighter’s Only interview this month you spoke about the importance of mental preparation. Could you give us some insight into your preparation on that front? Is there a particular technique or even image that you use that you’d feel comfortable sharing?

Andrew: That unfortunately is between myself and my maker so not at this time.
Bobby: No comment.

Do you have any words for Ruan?

Andrew: No. I’m prepared, he’s prepared, let’s dance!
Bobby: Ruan is a great guy and a great competitor. I know he’ll be ready for the fight. Ruan, we can’t wait to meet you again.

Andrew: That’s about it.
Bobby: This is an awesome opportunity and experience for Andrew and all of us lucky enough to be involved with his journey. Thank you to the Graeme, Cairo and the EFC for making it possible.