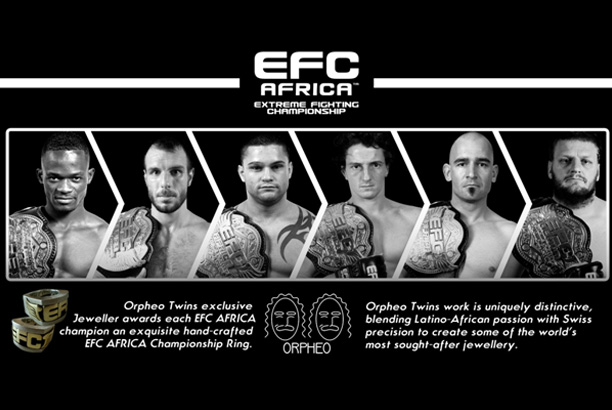 Johannesburg (South Africa) – On the 28th February EFC AFRICA’s newest welterweight champion, Michiel Opperman, received his EFC AFRICA champion’s ring from Pietro Cignolli, MD of Orpheo Twins Jewellers. As with each champion before him, and each to come, Opperman’s ring is 100% unique and will remain his regardless of how long he keeps his title.

“We put all of our passion into the making of the champion’s rings,” says Cignolli. “These athletes have proven themselves to be the best in Africa in a sport that asks for total dedication. For us it’s a privilege to craft a piece of jewellery that reflects the huge achievement that these athletes have reached.”

“All of our rings are individually made,” says Cignolli. “All the cutting, sawing and filing is done by hand and each one takes about two and a half days to complete. Every single EFC AFRICA champion has the only ring like it, anywhere.”

Orpheo Twins Jewellers have been providing EFC AFRICA champions with unique champion’s rings since the inception of the organisation. Former lightweight champion Wentzel Nel was the first ever to receive a ring, followed by the line of EFC AFRICA champions that have come after: Norman Wessels, Costa Ioannou, Adam Speechly, Dallas Jakobi, Garreth McLellan, Jeremy Smith, Jadyson Costa, Ruan Potts and Demarte Pena while recent champions JP Joubert and Andrew van Zyl are yet to receive theirs.

“We like to say our work is Latino-African passion delivered with Swiss precision,” says the Barcelona born Cignolli. “We design jewellery that makes a bold statement. Anyone who knows us will instantly recognize an Orpheo piece worn by a fellow convert. We don’t need big logos; our jewellery is our name through the language of our design.”

At EFC AFRICA 19, to take place on the 19th of April, both the welterweight and featherweight titles are to be challenged. Should Nel defeat Pena at featherweight he will become the first EFC AFRICA athlete to hold a title in two weight classes, and the first to have two different title victories inscribed on his ring. Should Pena triumph another diamond added to his piece creating a record to match leading title defender Costa Ioannou.

Orpheo Twins Jewellers have branches in Johannesburg, Hyde Park and Bedfordview. For more information visit their website at orpheotwins.com