Pena on Nel at EFC AFRICA 19 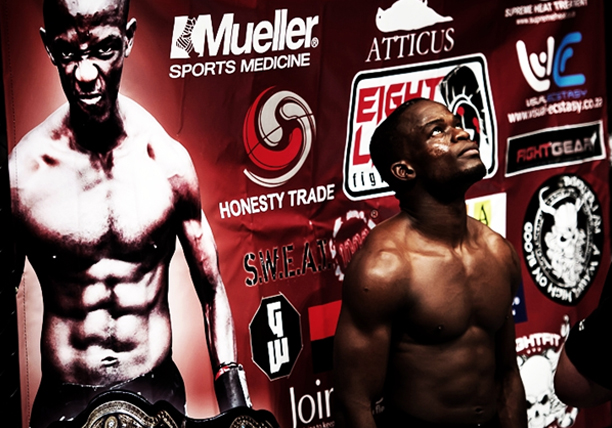 Johannesburg (South Africa) – This Friday Demarte ‘The Wolf’ Pena will defend his EFC AFRICA featherweight title for the third time. Wentzel ‘The Animal’ Nel is an EFC AFRICA legend, the promotion’s first champion, and the man looking to take the belt from The Wolf. In this exclusive interview Pena sheds light on his current state of mind, his opinion of his opponent, and his focus on annihilation.

WENTZEL NEL IS AN EFC AFRICA LEGEND WITH MANY YEARS OF FIGHT EXPERIENCE. DOES THE AGE DIFFERENCE BETWEEN YOU, AND HIS LENGTHIER EXPERIENCE, HAVE ANY BEARING ON THIS FIGHT?
I can’t really say because age is what you make it. In the UFC they had Randy Couture competing at 47. That was a rare case, but to be honest, age in most instances does affect you in one way or the other.

IS HE A FIGHTER THAT YOU LOOK FORWARD TO FACING?
I’m glad we are finally going to fight, I’ve prepared for him for about 8 months. It was unfortunate he got injured, but I’m glad it’s finally happening.

IS IT TRUE THAT YOU AND WENTZEL TRAINED TOGETHER BRIEFLY UNDER JACQUES ROSSOUW? WHAT IS YOUR PERSONAL RELATIONSHIP WITH WENTZEL LIKE?
I haven’t really trained with Wentzel but I did meet him through my previous wrestling coach and truly an amazing individual in Jacques Rossouw. At the moment there is no relationship. When he dropped from lightweight he knew he’d have to fight me. That’s a direct challenge. He wants my belt, he’s my enemy. After the fight we can be friends.

WHAT IS YOUR OPINION OF HIM AS A FIGHTER?
I’ve watched most of his fights. He has a specific pattern that he follows. Starts up, either he will shoot straight for a takedown to work for GnP or he moves around and throws a kick or two and sometimes punches, but then eventually shoots for the takedown to work for GnP. I’ve been preparing for that for a while now.

YOU ARE RENOWNED FOR YOUR STRATEGIC FIVE ROUND WARS. WENTZEL HAS BEEN QUOTED AS SAYING HIS STRATEGY FOR THIS FIGHT IS NOT TO HAVE ONE, THAT HE WILL RATHER BE PREPARED FOR ANYTHING AND EVERYTHING. HOW WILL YOU GO ABOUT BEATING WENTZEL? WHAT IS THE MAIN CHALLENGE THAT HE POSES?
My first and most important strategy to every battle is victory. When I fight I’m looking to win, that’s the priority, and for this fight it’s nothing different. I worked a lot on specific things to counter his type of style, I’m very confident that it will work.

DO YOU THINK HIS WELL-PUBLICISED MEDICAL CONDITION IS AN ADVANTAGE TO YOU? WILL YOU BE LOOKING TO EXPLOIT IT?
To be honest I don’t really know if he’s 100% or it’s just a mind game he is playing in order to make me believe he’s not 100%. So I’m not even thinking about it, I’m going in there to give it my utmost best, regardless of how healthy he is because it’s truly not my problem. If he took the fight it’s because he’s healthy enough to fight. I’m not even thinking about it.

DO YOU THINK THE FACT THAT WENTZEL JUGGLES A FULLTIME JOB PUTS HIM AT A FURTHER DISADVANTAGE, YOU BEING A FULLTIME ATHLETE?
Like my mentor Norman Wessels always reminds me: “It’s a game of percentages.” The more work you put in, the better the chances you have of winning. Since I put in more work, I believe that gives me a better chance to win.

SHOULD YOU DEFEND YOUR TITLE FOR THE THIRD TIME, WHAT WILL THAT MEAN TO YOU?
It will mean a lot to me, but ultimately I want to win not just for myself but to show other people that when you truly believe in something and are willing to put in the work and sacrifice, anything is possible.

WHO WILL YOU BE FIGHTING FOR?
I fight for every single individual out there that’s looking for a hope to keep going on, and never giving up.

DO YOU HAVE ANY SPECIFIC GOALS FOR THIS FIGHT, SOMETHING YOU’D LIKE TO ACHIEVE PERSONALLY, OTHER THAN SIMPLY DEFENDING SUCCESSFULLY?
This fight I want to showcase a different Wolf, I’m very determined. I’m fitter and stronger than ever and I really want this fight to happen. This fight I’m going to show the world what I’m made of.

DO YOU HAVE ANY WORDS FOR WENTZEL?
No.