Wilken vs. Zuluboy rounds off round 2 of Africa’s biggest MMA event 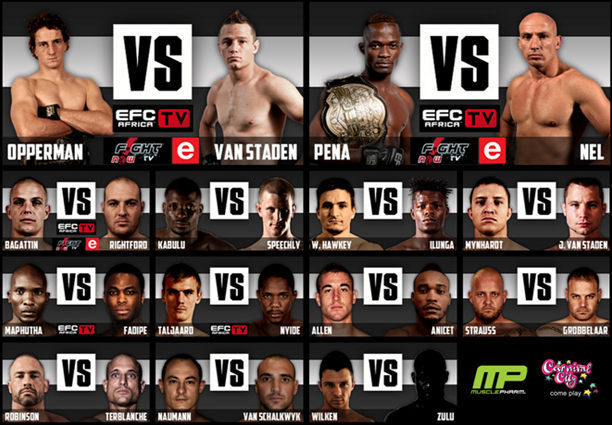 Johannesburg (South Africa) – The full fight card for EFC AFRICA 19, to take place on April 19 at Carnival City, has been completed. Fans are to be treated to an unbelievable evening of action delivered by an unprecedented number of EFC AFRICA’s top stars spread through both the prelim and main cards.

The evening is to be anchored with the hugely anticipated welterweight faceoff between champion Michiel Opperman and challenger Martin ‘The Punisher’ van Staden. Opperman is undefeated in the EFC AFRICA hexagon, van Staden has only been beaten by Opperman himself. Both have asked for a standing battle, fans wonder, will the champion and submissions specialist attempt to take it down? Whatever happens, the blood between the two can mean nothing but war.

Demarte ‘The Wolf’ Pena will defend his featherweight title for the third time on the evening. He faces EFC AFRICA legend Wentzel ‘The Animal’ Nel, the first man to hold aloft an EFC AFRICA champion’s belt, and potentially, should he win, the first to do so in two weight divisions. Nel is traditionally a wrestler, a passionate fighter committed to holding nothing back while Pena is a master tactician and ruthless athlete focused on targeting weakness and destroying it. Can Nel penetrate the champion’s relentless strategy, can he overpower Pena’s merciless mind?

Dino ‘The Lion’ Bagattin and Tyron ‘The Rush’ Rightford round off the main card in a near super fight. Both fighters are renowned stand up artists. Rightford is fresh from a first round right hook KO of David Buirski at EFC AFRICA 18 while Bagattin is coming off of a third round brutal and bloody TKO of former welterweight champion Dallas Jakobi. Smack talk for this fight has been searing the airwaves. Rightford has claimed he dropped a weight class specifically to “come and fetch” Bagattin, with his opponent responding, “I want to hurt Tyron. I’m not coming in looking for rounds. I want to hurt him.”

Below these luminaries huge EFC AFRICA personalities will do battle on the prelim card. Former champion Adam Speechly will face DRC national Francois Kabulu and hardcore GnP specialist at the tenth bout. Before that Wesley Hawkey will take on Alain Ilunga and devastating striker Leon Mynhardt returns against up and coming athlete and brother of the welterweight challenger Johan van Staden. Lower on the card Tumelo Maphutha faces off against Nigerian born, Ireland based newcomer Henry Fadipe in a bout beamed live to world on efcafrcia.tv. Top seed featherweight Boyd Allen will be in action, ‘Tiny’ Strauss will face Sors Grobbelaar, each coming off of a win at EFC AFRICA 18, and much hyped middleweight monsters Sean Robinson and Paul Terblanche will do battle. Peter Nyide makes his second appearance, Frederich Naumann returns to the hexagon and the second bantamweight matchup in EFC AFRICA history will be contested between Donnovan Wilken and newcomer Nkazimulo Zulu.

Fans not at Carnival City, Johannesburg, will be treated to the main card bouts beamed live across South Africa in selected Nu Metro cinemas, Canada on Fight Now TV, globally online at efcafrcia.tv and delayed live across Africa on e.tv. Two free prelim bouts will also be available; the middleweight battle between Tumelo Maphutha and Henry Fadipe and immediately before the return of team CIT’s toughest individual, Markus Taljaard against Durban’s own Peter Nyide, on efcafrcia.tv.

Simply, EFC AFRICA 19 is set to smash all the promotions previous benchmarks, and bring the house to its knees.