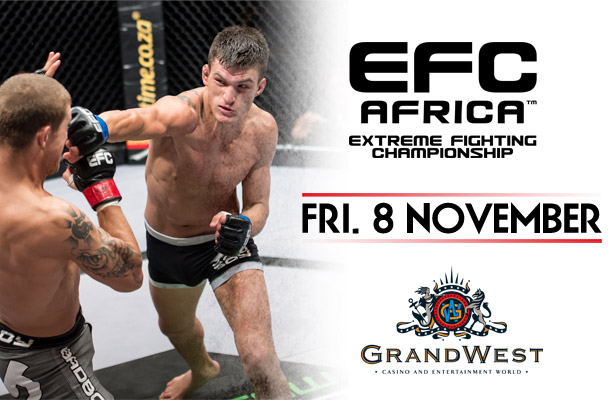 Johannesburg (South Africa) – EFC AFRICA is proud to announce that their second event to hit Cape Town has been confirmed. EFC AFRICA will return to the GrandWest Grand Arena on Friday, November 8, 2013 with an event set to obliterate the benchmark set at EFC AFRICA’s previous Cape outing.

“We are extremely excited to be heading back to Cape Town,” says EFC AFRICA president Cairo Howarth. “Our first show there was an incredible success. Our Cape Town athletes created unbelievable memories for fight fans, bouts like Don Madge versus Leon Mynhardt will probably always be seen as an EFC AFRICA highlight.”

“This time round we’re planning an even bigger stage for our Cape Town athletes,” he continues. “We want guys like Don, Alain Ilunga, Francois Kabulu and our new rising stars like Gideon Drotschie to have the chance to perform in front of their home crowd.”

“We have a huge Cape Town based fan base,” he concludes. “We’re extremely pleased that we get to return to the mother city and be a part of their passion for MMA and EFC AFRICA. Our second Cape show is going to be big.”

Watch the press for further details of the coming Cape Town event.

EFC AFRICA’s next event, EFC AFRICA 19, is presented by MusclePharm and takes place at the Carnival City Big Top Arena on 19 April 2013. Tickets on sale at Computicket www.computicket.com and tickets for the live broadcast to Nu Metro Cinemas available soon at www.numetro.com