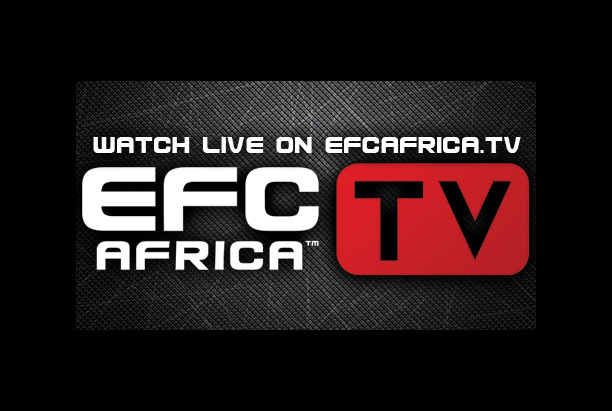 Those not able to attend tonight’s event at Carnival City will be able to watch all three main card bouts, live, on the newly launched efcafrica.tv platform. Full details for following the EFC AFRICA 18 action are as follows:

• Online at efcafrica.tv – 3 main card bouts, bouts 6&7: All the main card action of Africa’s biggest MMA event is just a click away at http://efcafrica.tv/
Purchase the evening’s three main bouts for US$24.99. Once purchased, bouts can be viewed as many times as you like within 24 hours. Bouts will be available for purchase before, during and after the event takes place. In addition to the main card bouts, bouts 6 & 7, Gideon Drotschie versus Brendon Groenewald and Ricky Misholas versus Sors Grobbelaar will be made available for viewing, live and free of charge.

• e.tv – 3 main card bouts: EFC AFRICA will once again be broadcast live throughout Africa! e.tv will broadcast three main card bouts live from 23:05. Simply tune in to e.tv from any of the 49 countries that receive e.tv and see Africa’s finest go to war!

Betting on all 13 EFC AFRICA 18 bouts is now open. BetXchange, a title partner to EFC AFRICA, have launched a brand new option for this event allowing punters the added option of predicting the manner of victory on all three main card bouts. Visit http://www.betxchange.co.za/ for more information. EFC AFRICA 18, presented by MusclePharm, takes place at the Carnival City Big Top Arena on 1 March 2013.