“The KO King Is Back” 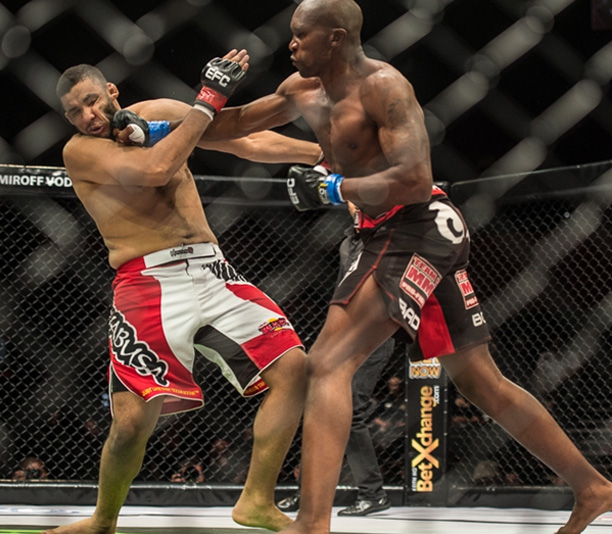 Johannesburg (South Africa) – Due to personal circumstances Armand de Bruyn has had to pull off of the EFC AFRICA 19 prelim card, opening the way for the current EFC AFRICA fastest KO record holder and team CIT tough man Thumelo Maphutha to step in against Nigerian born, Ireland based fighter Henry Fadipe.

For Maphutha it’s a mighty opportunity that is presenting itself at the perfect time. This hard as nails Pretoria based fighter has walked an unforgiving path in the EFC AFRICA hexagon of late. With two knife edge decisions falling against him it seems the time is now for him to make good.

At EFC AFRICA 15 he suffered a difficult loss when disqualified against current middleweight contender Liam Cleland. The offense was a kick thrown by Thumelo to his grounded opponent, a seemingly instinctive strike that many debate actually landed, leading to a difficult but final decision. At EFC AFRICA 16 he handed Wade Henderson a three round nightmare of a fight, landing brutal strikes all throughout but ultimately missing out on a decision that again, many believe could have gone the other way.

On the back of two losses and down time of over six months he was given a lifeline when, on only four days’ notice, he was handed the opportunity of replacing injured light heavyweight athlete Ian Visser on the EFC AFRICA 18 prelim card. Fighting at a weight class above his own he entered the hexagon determined to prove he was far better than his EFC AFRICA 3-0 status suggested. With two freight train rights he sent Cape Town athlete Chris Du Pont tumbling to his knees in only seven seconds, the fastest end to a fight in the EFC AFRICA hexagon yet.

“I couldn’t prepare for my fight against Chris,” says Maphutha of his stunning victory. “I knew I was not fit enough. I knew it was a case of me knocking him out, or he knocking me out. So I went full force. I had to win.”

Of his coming opportunity, a fight once again scheduled at his preferred weight class, he has this to say:

“I’m very happy to fight. This time I have time to prepare so I will not be slowing down. I will be ready.”