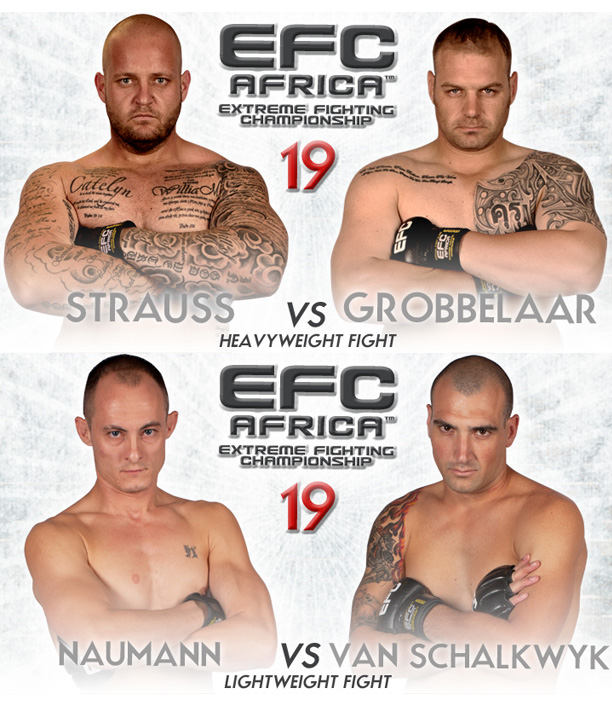 Johannesburg (South Africa) – Today two more bone crunching fights have been added to the EFC AFRICA 19 prelim card, taking place at Carnival City’s Big Top Arena on April 19. Sors ‘Guru’ Grobbelaar will face Wilhelm ‘Tiny’ Strauss in a heavyweight matchup while David ‘Savage’ van Schalkwyk will take on Frederich ‘Ninja’ Naumann at lightweight. All four athletes were in action at EFC AFRICA 18 and all of them will be looking to lay down a marker at the coming event.

Both Grobbelaar and Strauss are coming off of wins. The kickboxer Grobbelaar took part in a relentless and bloody three round war with Ricky Misholas, achieving a split decision victory that many fans still maintain should have favoured his opponent, a victory that Grobbelaar himself will be looking to validate. Earlier in the night Strauss obliterated Christophe Walravens with blistering strikes to win by TKO in the first – a complete turnaround for the previously 0-2 striker and a new momentum he will be looking to build.

For the lightweights van Schalkwyk has been handed an excellent chance to jump start his entry to the division. He lost on his debut to Juan Lubbe but fought at welterweight, a weight above his preferred class, and will now be looking to dominate. Similarly to Strauss Naumann also removed his opponent in the first round, this time with a smoothly placed triangle and will be on fire to repeat his performance.

“The EFC AFRICA 19 fight card is filling up with exceptional talent,” says EFC AFRICA matchmaker Graeme Cartmell. “The event is going to be huge. Looking at who’s already there and the fights we will be announcing soon … it’s going to be a massive night.”