How Big Is This Fight?

Soldierboy and Cleland looking for a shot at The Pitbull. 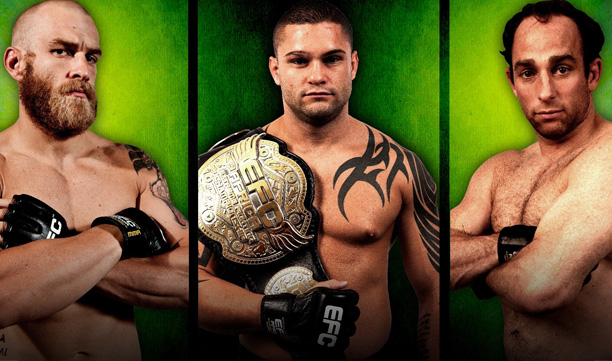 Johannesburg (South Africa) – At EFC AFRICA 20 Garreth ‘Soldierboy’ McLellan will face Liam Cleland in what is undoubtedly a bout for the middleweight title contendership. Whoever wins this fight will face Jeremy ‘The Pitbull’ Smith and for both men the desire to do so is furious.

The Pitbull is a fighter with only one loss to his record, that digit coming against Liam Cleland before both joined the EFC AFRICA organisation. Similarly, Cleland has only been beaten by one man, Smith in a rematch at EFC AFRICA 09. There he faced an athlete freshly returned from training and competing in the United States with a whole range of new weaponry added to his arsenal. At the end of the first round Smith finished Cleland with a knee to the face followed by ground and pound. For both men there is unfinished business.

“Liam is a great fighter,” said the champion in a recent interview, “he’ll dominate on the ground. But if Garreth sticks to his game plan, anything can happen.”

The Soldierboy finds himself in a similar situation. He has suffered two defeats, one to Wade Henderson in his very first pro MMA fight, a defeat avenged at EFC AFRICA 05, and one other to Jeremy Smith at EFC AFRICA 12 where he lost the title. Smith entered the Hexagon smooth and focused, responding to every threat the champion threw at him with equal force, finally capitalising on an error that brought the guillotine choke and victory. Soldierboy seemed ultimately unable to answer, a far cry from his usual self. For Soldierboy avenging his loss is imperative. Before he faced Smith he was an unstoppable force moving through African MMA. Since then he has seen a return to form with the demolition of Armand de Bruyn at EFC AFRICA 15, afterward pointing at the champion in the stands and calling him out. He wants a title shot; he wants what he has lost.

His frustration is deepened by the back and forward seen in trying to sign a fight with Smith. One was tentatively signed post Smith’s victory, but the champion had to pull off due to illness. Another agreement was reached but McLellan suffered injury and had to withdraw. Finally, for the coming EFC AFRICA 20, a matchup was in the process of being locked down when the champion suffered a recurring hand injury, forcing him to have surgery.

Prospects for an all-out war between Soldierboy and Cleland could not be any brighter. After experiencing a DQ ending in his match with Tumelo Maphutha at EFC AFRICA 15, Cleland has bounced back with a comprehensive and brutal demolition of Donavin Hawkey at EFC AFRICA 17. He is a highly skilled submissions fighter while Soldierboy brings an intensity backed by solid, all round skills that are rarely seen, anywhere. With so much on the line both men will be giving their all come Thursday, 27 June.