It’s All Or Nothing For The Animal 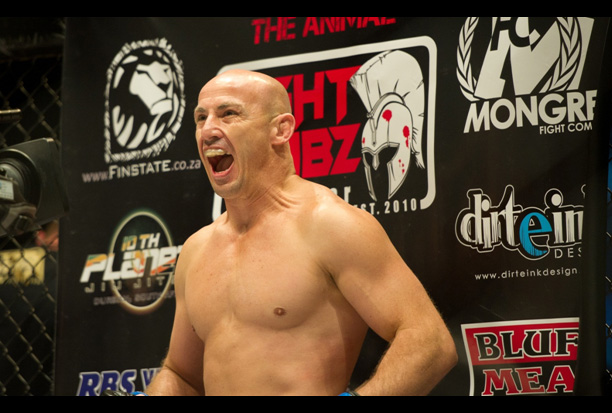 Johannesburg (South Africa) – Wentzel ‘The Animal’ Nel is to challenge featherweight champion Demarte ‘The Wolf’ Pena at EFC AFRICA 19 for the featherweight title belt. For ‘The Animal’ the coming matchup is far more than an opportunity to become a champion, more even than the real possibility of becoming EFC AFRICA’s first ever champion in two different weight categories; it’s simply an opportunity to compete in the sport he loves, potentially for one last time.

“I sat in the specialist’s office when he first saw me,” says Nel, “and he told me it doesn’t look good. All the signs were pointing to my neck. I cried. I wasn’t ready to stop.”

In September of last year Nel was training when he was seized by agonizing pain shooting through his back and up into his neck. He could not move the right side of his body and was rushed to hospital.

“He said I must relax,” says Nel, “I mustn’t get agitated because all the tests weren’t completed yet. I told him I want to know the truth; can I fight in the next year or not? He said that I’ve lost 80% of the power in my left hand, and if it doesn’t come back in three months I must retire.”

“I worked my ass off,” he says. “I did everything I can and I’m back to full health.”

Nel was diagnosed with Thoracic Outlet Syndrome, a condition that causes muscular spasms in the back, often trapping nerves in the spinal column which mimics the effects of a neck or spinal injury. It is agonisingly painful and cannot be cured, only maintained. Through trial and error Nel has discovered how to work with the injury, committing to a changed training regime, regular specialist sessions and yoga to keep him supple. The spectre of the injury is constant. It could flare up at any time.

“In my mind I’m not ready to give up,” he says. “I’m not making a cent off of this fight, all the money I’m earning I’m putting into maintenance on my condition. I’m not done. I love this sport so much. I have a last chance, and I’m taking it.” “I’ve had a good life and I’ve had bad moments,” he continues. “This injury is the least of my worries. I’ve been shot, I’ve had a gun in my mouth, a robbery with people wanting to blow my head off. It’s going to take a lot to break me.”

Nel is a family man, married with two children for whom he moves the earth to make time to see, often training at three in the morning to be certain to fit an hour for them into his day, and maintaining a full time job to provide for his family.