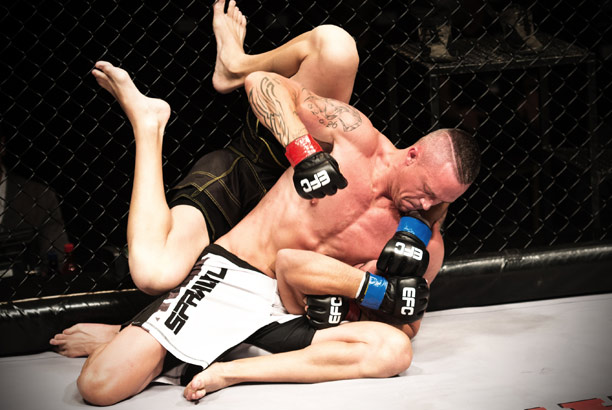 Lubbe in action against David van Schalkwyk at EFC AFRICA 18

Johannesburg (South Africa) – At EFC AFRICA 20 Juan ‘Legacy’ Lubbe, an athlete with a highly developed and unorthodox striking game, is set to face African MMA legend Neil ‘The Original’ Diesel, an opponent with a huge reputation that has been fighting professionally for over a decade.

“I met Neil a few times,” says Lubbe. “He’s not a bad guy at all. I rate him. He’s experienced and matured in the fight game making this fight very exciting.” “I’ve fought some of the best in the EFC,” he adds. “Fear is no option in this game we’re in. If I had any fear of Neil I wouldn’t have fought.”

Lubbe is a fighter that many feel has not yet fully revealed his all-round MMA ability, as his transition to full MMA from his kickboxing roots took longer than most.

“I came back from a two year rest,” he says, referring to the gap in his fights between EFC AFRICA 08 and 18. “Before that I was arrogant and self-centred. I fought for the wrong reasons. Fighters and people look back at my past and judge me by that. I have not returned to come make some average comeback. I’m here to fight.”

When probed on whether he thought Diesel deserved his reputation, after so few performances in the Hexagon, Lubbe had this to say:

“To be the toughest and best fighter in the EFC we all have to prove it in the EFC. I rate Neil as a very good fighter and respect him for that.”

“Neil has good hands and flows on the ground,” says Lubbe of Diesel’s style, “this fight will be all over the Hexagon.” “I do not underestimate any of my opponents. EFC AFRICA sign the best on the continent meaning there is no such thing as an easy fight. He better be ready to go anywhere with me. This one is going to be massive.”