Pena To Spread MMA To Africa

Pena and Cutendana to hold MMA seminars in Luanda 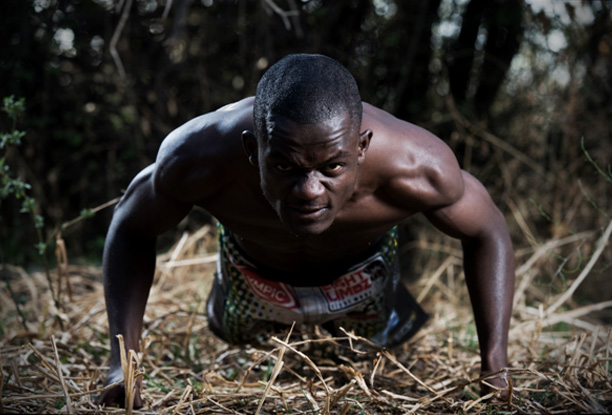 Johannesburg (South Africa) – This Sunday, May 19, EFC AFRICA featherweight champion Demarte ‘The Wolf’ Pena and EFC AFRICA new signing as well as the man that introduced Pena to MMA, Marino ‘The Scorpion’ Cutendana, are to travel to their home country, Angola, to raise the profile of the sport of MMA there.

“MMA needs to be more fully recognised in Africa,” says Pena. “It should be a case of leading fighters coming from everywhere. The reality at the moment is that the leading guys are training in SA, wherever they come from. I want to see the infrastructure in Angola being built up.”

Pena is the son of legendary freedom fighter General Arlindo Pena, and the grandson of Jonas Malheiro Savimbi, founder and one time leader of UNITA. His family were forced to move to South Africa when his father was poisoned during the Angolan Civil War, and they subsequently stayed. Pena discovered Mixed Martial Arts during high school – himself, Cutendana and others creating an informal MMA club and holding underground tournaments in empty classrooms – but it was only during his early university years that Pena decided to pursue MMA fully.

“There are a few Angolan fighters that are doing well,” says Pena. “Myself, Bernardo Mikixi and now Marino entering the EFC, but I am the only champion so far. A lot of guys see me as a role model.”

After Pena’s recent victory over Wentzel Nel at EFC AFRICA 19 he has seen a huge surge in his fan base, particularly from individuals in his home country contacting him to congratulate him and to discover how one can get into the sport.

“Gym owners from Angola contact me,” says the champion, “young people wanting to get into the sport, many women too.” He laughs, then adds. “They actually mainly want to find out how they can get into the sport. Many talk about how my last fight was inspiring and so they would like to try the sport themselves.”

Pena’s title defense against Nel was a milestone. After weathering a blizzard of punches in the opening two rounds, punches he describes as “literally being hit by a brick”, he was able to hold his composure and earn the victory by devastating striking interspersed with hard ground and pound.

“Fighting a guy like Wentzel was good for me,” says Pena. “I had other fights where I didn’t need to do as much to remain champion but Wentzel gave everything he had. I thought I was going to be able to outbox him but he’s not like other fighters. He was a tornado, I had no defence against his boxing. Instead I used leg kicks to grind him down, and kept my composure.” “I feel that after this fight the perception of me and the sport in Angola has changed,” he adds, “that’s why it’s important for me to go home. People there appreciate that it’s an Angolan that has done well and become champion.”

Pena and Cutendana will be conducting MMA seminars at various martial arts gyms in Luanda, The Fight Society gym being the premiere among them, a gym that has done a lot to promote Pena’s career and African MMA in the country, as well as to appear on Angolan television.

“I will always be Angolan,” says Pena, “no matter how long I live in South Africa for. Angolan martial artists have the skills. Our Jiu-Jitsu athletes regularly beat South Africans at international competitions, it’s just the specific sport of MMA that needs a boost. I want to see another Angolan champion, and I want to see more champions from the rest of Africa too.”

For more information on EFC AFRICA and its athletes, visit efcafrica.com