Akleker Out, New Talent To Face The Professor 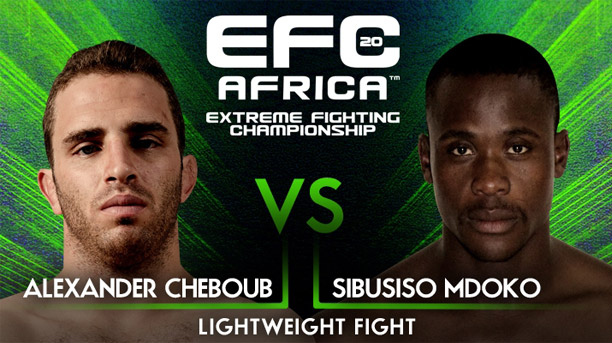 Johannesburg (South Africa) – Khalil Akleker has had to pull off of the EFC AFRICA 20 prelim card due to personal reasons. Alexander ‘The Professor’ Cheboub is now to face EFC AFRICA debutant Sibusiso Mdoko, an athlete fighting out of Panther Fighting Arts in Cape Town.

“Mdoku is a complete MMA fighter,” says Graeme Cartmell, EFC AFRICA’s matchmaker. “He’s been specifically groomed as the first of his kind to come out of Anthony Kettle’s camp, a gym known for incredible standup fighters who transition to MMA and learn the art in competition. With Mdoku time has been taken to nurture his MMA game, and it shows. He’s a massive new talent.”

“I have been watching Alex for a long time,” says Mdoko. “He has excellent standup and is obviously very good on the ground. I am excited to face him, excited to show my skills in the Hexagon.”

“Obviously I don’t know much about him,” said Cheboub in an interview today. “Coming from Anthony Kettle’s camp I’d expect him to have excellent striking.” “It’s always difficult to change opponents,” he added. “I had to pull out of my first fight and knew it must have caused stress for my opponent. Obviously I was preparing specifically for Khalil’s very good ground game. At this stage in my camp I won’t be changing things around too much, rather concentrating on what I am doing and perhaps adding in one or two small variations.”

Cheboub is has often had difficulty in making weight. He took time to elaborate on the challenges he’s faced in that area.

“It started with my fight against Costa,” he said. “I knew Costa cut a lot and I knew he was very strong so I went through a period of bulking up, adding muscle, but then wasn’t able to manage the cut as I should have. Against Ashley [Calvert] and Leon [Mynhardt] the problem was essentially the same, I simply wasn’t making use of the right knowledge. I’m working with a new strength and conditioning coach now and my cut is going very well. I’m on 74.5kg’s with two weeks to go.”