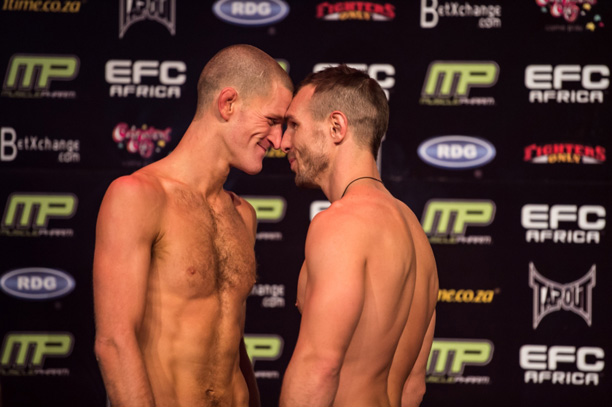 Johannesburg (South Africa) – Intensity was at an all-time high at the weigh-in for EFC AFRICA 14, presented by MusclePharm. Carnival City’s Mardi Gras Theatre was packed with mixed martial arts fans shouting support for their favourite athletes during 13 nail-biting stare-downs.

Featherweight champion Demarte Pena and challenger Wesley Hawkey both made weight, then butted heads and had to be pulled apart, promising to settle things in the hexagon tomorrow night.

Lightweight champion Costa Ioannou and challenger Adam Speechly also made weight. Unlike their featherweight counterparts, the lightweights displayed respect for each other as they shook hands and exchanged pleasantries ahead of their bout. 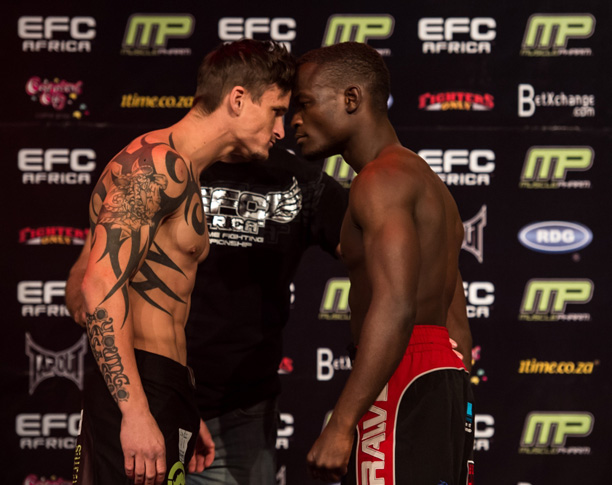 Wentzel Nel and Denzil Wait were all pushes and shoves as they locked eyes. Nel is a former lightweight champ hoping to regain a title at featherweight, while Wait needs a win to ignite his career. Only one hand will be raised in victory tomorrow night and both athletes are clearly feeling the pressure that thousands of live spectators and millions of TV viewers will bring.

At heavyweight, Angola’s Bernardo Mikixi stepped up to Egypt’s Mahmoud Hassan with bad intentions written all over his face, and with good reason, as the winner of this bout will go on to face EFC AFRICA heavyweight champion Ruan Potts later in the year.

Former middleweight champion Garreth ‘Soldierboy’ McLellan was livid as his opponent Danie ‘Pitbull’ van Heerden missed weight by 4kg. If Soldierboy is as aggressive and explosive tomorrow night as he was at weigh-in, MMA fans are in for fireworks!

Alex Cheboub, Denzil Wait and Danie van Heerden did not reach their divisions’ weight allowance and have 2 hours to make weight. Further information on these bouts will be made available ASAP.