It’s One Week To Fight Night!

African MMA will never be the same again 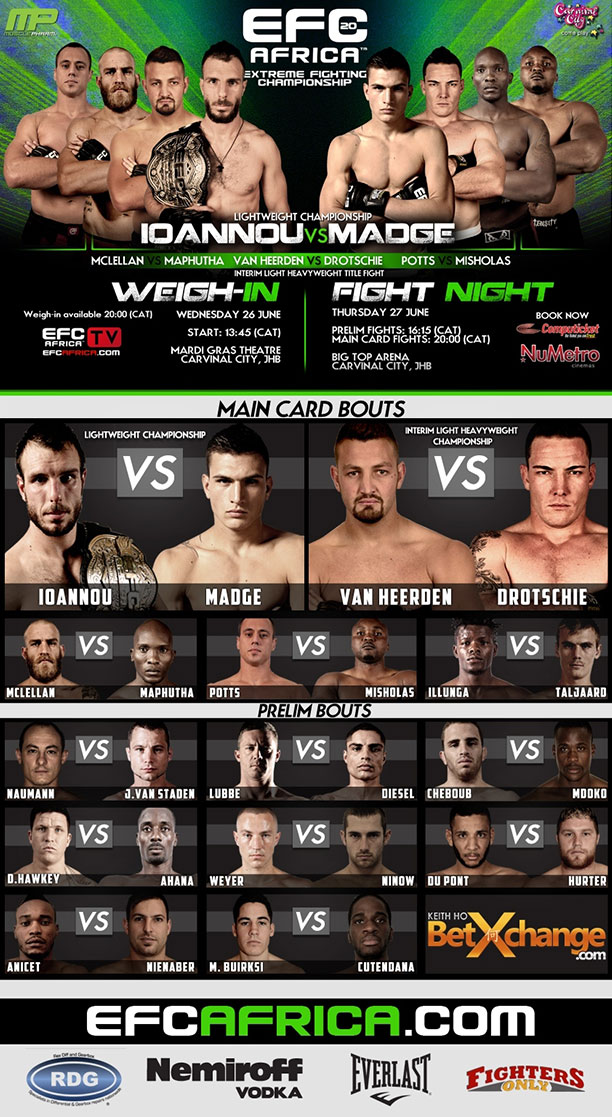 Johannesburg (South Africa) – Today marks exactly one week until Africa’s biggest MMA event goes live across the world. Being the 20th event staged by Africa’s leading MMA organisation, EFC AFRICA 20 has been crafted to deliver the most colossal MMA experience ever seen on the continent. Here’s a rundown of what to expect on 27 June, and also a highlight reel of the events that have gone into making this night unforgettable.

BIGGEST EVER EFC AFRICA 20 is headlined by the most talked about title matchup in African MMA history. Ever since the bout between undefeated lightweight champion Costa Ioannou and Muay Thai Superstar Don Madge was announced social media has been on fire with the prospect of seeing these two men going head to head. The hype surrounding this fight has eclipsed anything seen before.

FIRST INTERIM TITLE BOUT At EFC AFRICA 20 iron fisted Danie van Heerden and MMA prodigy Gideon Drotschie will go to war for the organisation’s first ever interim light heavyweight title. Current light heavyweight champion JP Joubert is out for an indefinite period, leaving the way open for these two behemoths to go all out for the crown.

NEVER SEEN BEFORE On 5 June 2013 groundbreaking news was announced. EFC AFRICA and SuperSport, Africa’s sports broadcasting giant, have entered into a three year broadcast deal. In one day African MMA TV coverage jumped from three hours every two months to three hours daily, changing the landscape of the sport. EFC AFRICA 20 will be the first live broadcast of African MMA on SuperSport. With fans now being able to see five main card matchups live, and in HD, African MMA will never be the same.

LIVE WEIGH-IN For the first time ever African MMA fans will be able to experience the weigh-in live. Broadcast on SuperSport Blitz and streamed live on www.efcafrica.tv, tune in to see sparks fly as the event’s warriors face off for the first time.

“EFC AFRICA 20 is huge for us,” said EFC AFRICA president Cairo Howarth. “There’s so much happening that is the biggest we’ve ever seen. We’re focused on making it massive for the fans, we’re going to make history on June 27.”

AFRICA
All five main card bouts to be broadcast live on SuperSport in full HD on SSHD4 and SuperSport Blitz from 20h00 CAT.