“Ricky Is Going To Have To Rock It Early”

‘One Gear’ on Potts vs. Misholas 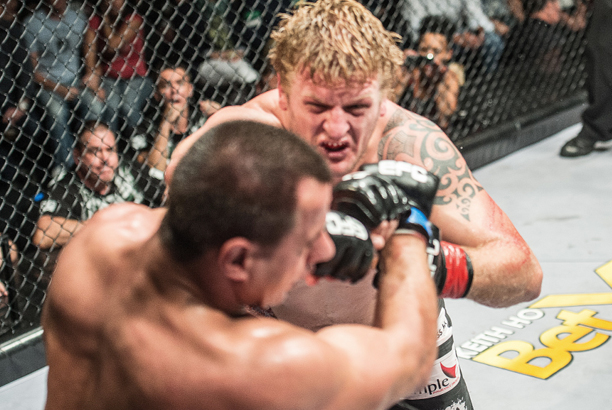 You are familiar with the territory Ruan must be in now, having experienced his first loss. How do you think his mind-set will have shifted from being undefeated, and what do you expect from him in his first comeback fight?
My mind-set was one of release. Once I had experienced loss it was a weight off my shoulders, I think it made me a more determined and dangerous fighter. That hunger to claim your rightful place in the pecking is a powerful motivator. I would imagine Ruan is eager to get to the top again so I think he will be training his ass off to get there. I expect much of the same from him. I don’t think he will risk standing with Misholas. Clinch and ground will win the fight for him.

This is Ruan’s climb back to title contention; do you hope to see him in big fights so that you can understand his game better if you do face him again?
I don’t feel he has enough time to change his game that much before we fight again, I would think he would work on getting better at the things he is good at.

Ruan held up to your punches and you are rated as having some of the heaviest hands in the business. Misholas is known for his heavy hands and intense striking. Do you think Potts will be in trouble if caught by Ricky’s fists?
I don’t think I have the heaviest hands but I do hit pretty hard. I don’t think I inflicted much damage with my hands in that fight. I don’t think Ruan wanted to stand toe to toe with me. That battle will happen in the future. I think anyone would be in trouble if they got caught by Ricky, striking is his thing.

Will Ricky be able to put him away?
If he gets caught it will affect the outcome.

Ricky’s coach Walter says he’s never trained this hard for any fight, what advice would you offer his coach?
Walter knows his stuff. He knows Ruan is going to clinch and try to get on top. He knows that he must keep his distance and keep off the fence, and if he is on his back to scramble to his feet.

How does Ricky beat Potts?
It will have to be a KO.

We know Potts is capable of four rounds and Ricky three. If it went the distance do you think it would get sloppy or would they keep the pressure going?
Ruan is a composed fighter. Ricky is going to have to rock it early if he wants to win it. In my very humble opinion Mikixi almost got it right.

You looked unscathed after your fight with Potts. Can he inflict enough damage to stop Ricky?
I was on top on the ground and dominated the clinch and the fence in four out of the five rounds. I don’t think Ricky has the ground or clinch experience to do the same. His game plan will be different I’m sure. If Ruan gets on top Ricky’s going to have a battle on his hands.

Having experienced his first loss, could that affect Ruan’s confidence coming into this fight? Is that something he needs to overcome?
I have no idea? I would think he would be very hungry and dangerous.

Do you expect Ruan to take this fight straight to the ground?
I do.

What sort of chance do you give Misholas in this fight?
A punchers chance!

From a focus and attitude point of view, what does Ricky need to do to win fight?
I think he’s got a great attitude and it fully compliments his fight style. He’s going to have to knock Ruan out. I’m sure that he believes he will. That’s that!

Do you think Ruan’s reputation will be a mental obstacle that Ricky needs to overcome?
I don’t. Guys like Ricky and Bernardo are fearless, that’s how they are, they back themselves to win which always makes for a great match up!

How do you see this fight going?
Potts TKO.