Crucial insights on all the action 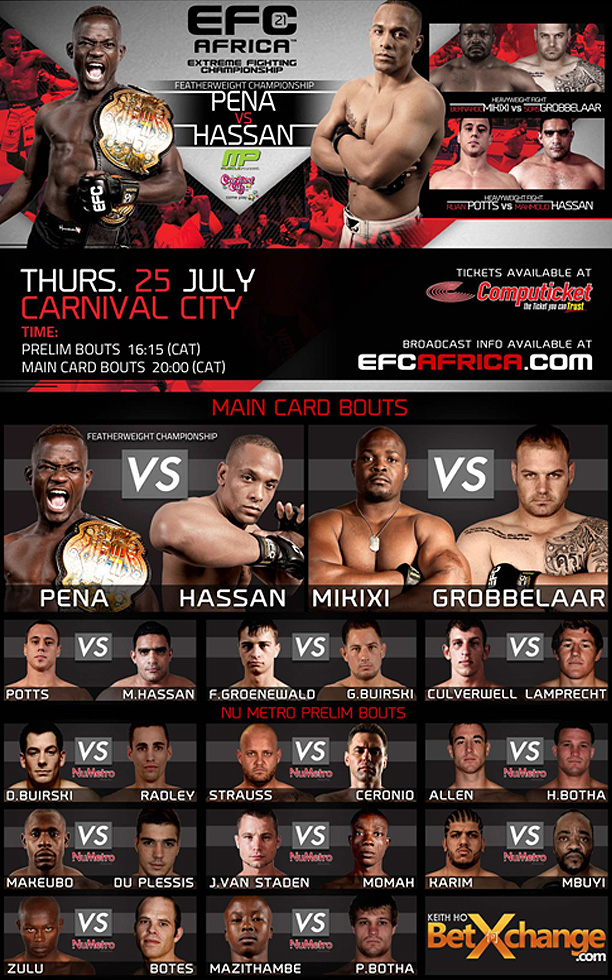 Johannesburg (South Africa) – The EFC AFRICA 21 fight card is jammed with top flight MMA action from the continent’s greatest fighters. Here’s a blow by blow account of why this entire card is going kick hard on July 25.

Fight 3
Karim vs. Mbuyi – Clash of giants. Egyptian MMA behemoth vs. DRC Judo specialist.
Abdel Karim debuted against Andrew van Zyl, a trial by fire, and is ready for his next encounter. Mbuyi has a black belt Judo pedigree and fists to match the Egyptian.

Fight 4
Van Staden vs. Momah – Pivotal showdown. MMA natural vs. Nigerian K1 champion.
Johan van Staden is as tough as they come and looking for his opening to the top level of the lightweight ranks. Momah makes his first trip down to lightweight where a strength and reach advantage could see him fulfil his potential.

Fight 5
Makuebo vs. Du Plessis – A stand and trade war. DRC heavy handed boxer vs. undefeated world K1 champion.
Makeubo has confirmed his toughness while Du Plessis has yet to experience Africa’s biggest stage. The debutant has a lot to prove against an uncompromising foe.

Fight 6
Allen vs. H. Botha – Calculated dust-up. MMA phenomenon vs. world-class wrestler.
Allen and Botha are both at the top of their respective games. Allen insisted on taking this fight at lightweight instead of feather, a clear indication of his respect for Botha’s strength and grappling capabilities.

Fight 7
Strauss vs. Ceronio – Heavyweight battle. Brawling titan vs. boxing powerhouse.
Two men with everything to lose and everything to gain. Both are coming off of a loss, both need to secure a position in the heavy ranks.

Fight 8
D. Buirski vs. Radley – Striking spectacle. Muay Thai specialist vs. K1 champion.
Coming off a KO loss to Rightford Buirski needs to put the Capetonian up and comer in his place. Radley spars with Don Madge and knows the Hexagon has not yet seen what he’s capable of.

Fight 9
Culverwell vs. Lamprecht – Fight of the Night maker. Toe to toe trader vs MMA mauler.

Culverwell is happy to trade with the biggest and best. Lamprecht oozes old school strength and mauling grit. These boys are going to bang, pure and simple.

Fight 10
Groenewald vs. G. Buirski – Big punches and slick submissions. BJJ purist vs. heavy handed brawler.
Groenewald has never been finished and has a huge BJJ pedigree. Buirski is the king of the overhand right, an explosive power athlete that loves mixing it up with a gas tank that doesn’t empty. This fight could go anywhere.

Fight 11
Potts vs. M. Hassan – Mammoth match-up. Heavyweight MMA machine vs. KO head-hunter.
Potts makes his first comeback trail appearance after the only loss of his career. Hassan has the opportunity to cement his name forever with just one of his sledge hammer hands. A fight poised on KO knife edge.

Fight 12
Mikixi vs. Grobbelaar – Heavyweight decider. Judoka and boxing disciple vs. K1 striking executioner.
General public opinion says that Mikixi has this on power and aggression but if Grobbelaar can make it through the first round his strategic mind and accurate kicks should make the difference.

Fight 13
Pena vs. A. Hassan – Championship grudge match. Angolan MMA superstar vs. BJJ Bad Boy.
Pena has been tested by the best and won. He has a granite chin and GnP that doesn’t slow. He is fierce, strategic, fit and immensely strong. Hassan is a maestro of technique, an athlete who fights at his own pace and controls with years of experience. The Wolf has never faced an athlete with this level of skill, Hollywood has never battled anything as brutal and accomplished.