“I Fought Tiny With A Broken Foot” 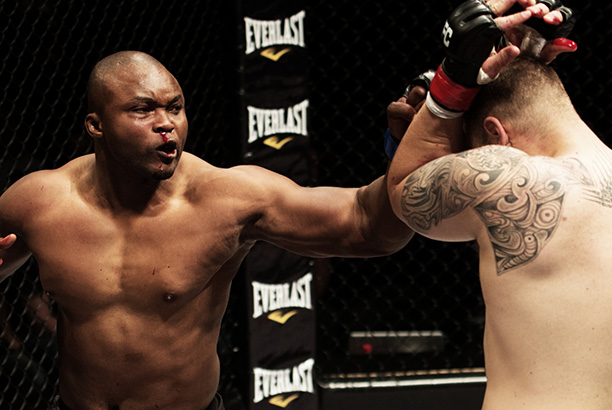 Johannesburg (South Africa) – At EFC AFRICA 20 Ricky Misholas controversially pulled out of his scheduled fight with former heavyweight champion Ruan Potts on the night of the event. Much was reported on the incident last week, today Misholas gives his last word.

“The EFC AFRICA doctors did check me but they did not check my hand. My hand was not cleared by them. Due to a misunderstanding a letter written by my doctor the day before, saying I was not fit to fight, was not read by EFC. I didn’t know they hadn’t read it. I thought they knew. If they had read the letter everything would have made sense.”

Misholas’ decision to withdraw caused a huge uproar. He felt he had no other option. The injury, a first metacarpal joint ligament sprain, was sustained three days before the fight, treatment was taken in the hope that it would stabilise in time, but it did not. He had been advised that if he were to strike with that hand long lasting damage would be done, if not permanent.

“It was not an easy decision,” says Misholas. “I had a lot of people coming to watch me fight. I had trained hard, I’d never been as fit. This was the biggest fight of my career.” “If I can’t punch how am I going to fight? I’m not a grappler. I’m not a ground specialist. I would have punched him and then my hand would be damaged, I would be out for a year. Potts is the former champ. I didn’t want this to go to the judges, I wanted to knock him out, flat out, that is the only way I will beat him.”

Looking back on the whole situation, when asked if he had any regrets, Misholas responded:

“I don’t. The mess up here came with miscommunication.” “I fought Tiny [Strauss] with a broken foot,” he adds. “People don’t know that. I didn’t mind. I wasn’t going to kick him, I was going to punch him. I fought Paul Kietzmann on antibiotics, you think I get that tired normally? I was very sick, bronchitis, but I knew I could still fight him. With Potts, with my right hand gone, my weapon, I couldn’t fight.”

“Potts needs to be tested,” he adds. “He has not yet been punched properly on his jaw, his nose. He’s never been hit before. I hope I can fight him again.”

Misholas’ hand needs further observation. There is still the possibility of surgery which he is hoping to avoid. He should be back in training within ten days.