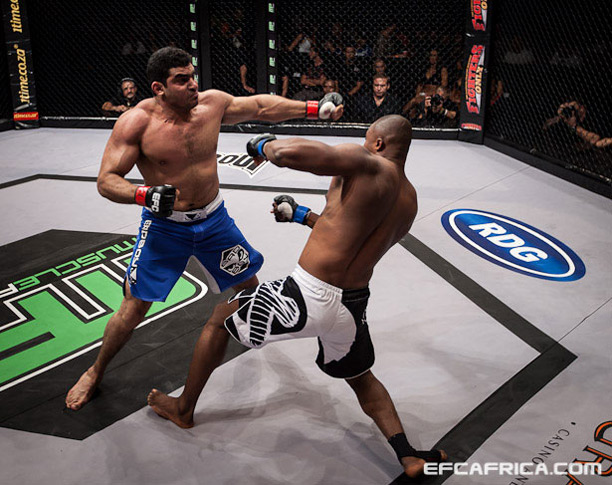 Johannesburg (South Africa) – Fearsome heavyweight Mahmoud ‘Hellboy’ Hassan goes up against former heavyweight champion and only once defeated Ruan ‘Fangzz’ Potts on July 25. In this interview ‘Hellboy’ reveals that he can’t wait to face the former champ and do what he does best, knock him out cold.

Ruan is the former, only once defeated heavyweight champion. How do you feel being given the opportunity to face him?
I am very happy to face him. I want to fight the best. Fighting Ruan is almost like fighting for the title. I can’t wait.

What happened in that fight? What went wrong?
This is MMA. Nothing went wrong, but of course there were small mistakes. I would say I was too rushed. I wanted to be the winner in the first minute. I should have waited.

Ruan is known for a high level ground game as well as dynamic striking with both feet and hands. What is your strategy in facing him?
My strategy is one hand, one shot, one KO. Hellboy style.

There is a lot of turmoil in Egypt at the moment. Could you tell us how day to day life has changed with all the political unrest?
Things here are definitely in turmoil. Luckily it is possible to stay out of it. I have been concentrating on my training, and of course work.

Where are you going to beat Ruan in this fight?
In the first round, with a fist to his face.

How is your training going?
Excellently. I am a member of the best team in Egypt and my sparring partners are high level. I’m training with the hulk, Abdel Karim, every day. Abdel could knock Ruan out, so will I.

What can Ruan expect from you on the night?
KO of the night.

Do you have any words for him?
Ruan, watch out. This is Hellboy. I am going to knock you out, it is going to hurt.

Is there anything else you would like to say?
Thanks to EFC AFRICA for giving me this chance. Thank you to the fans, to my coach, Mohamed Abdel Hamid, and my team.