“My Jaw’s Not Been Tested?”

Potts has his say ahead of EFC AFRICA 21 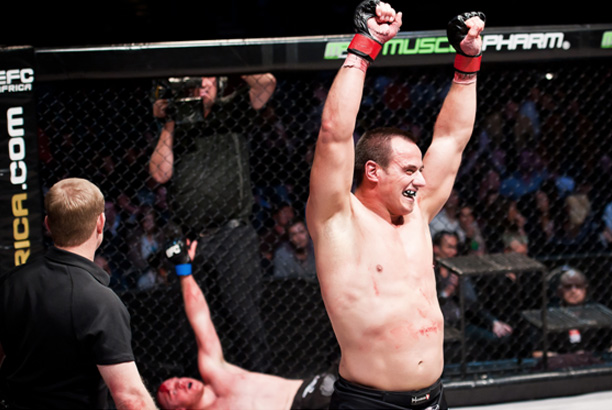 Johannesburg (South Africa) – Yesterday Mahmoud ‘Hellboy’ Hassan released an interview detailing how he is looking forward to knocking former heavyweight champion Ruan ‘Fangzz’ Potts out at EFC AFRICA 21. Potts, making his first appearance in the Hexagon after the only loss of his career to current champion Andrew van Zyl, and after being denied the opportunity at EFC AFRICA 20 due to a late withdrawal by his opponent Ricky Misholas, today releases an interview of his own.

How fired up are you, after your loss and after not being given the chance to get back in action at EFC AFRICA 20?
I have had a very long training camp for this fight because of Ricky’s unprofessional withdrawal from EFC 20. It’s been a hard push to keep my camp going for an extra month but very successful. I am excited for this fight as I’ll be killing two birds with one stone, so to speak. I need to beat Hellboy, and Hellboy beat Ricky.

Did you take his withdrawal personally in any way? Would you like to face him again?
I did take it personally because as a true athlete he should have done the right thing, either pull out on time or compete. What was up with the ‘bravado’ act at weigh-in even though he knew he would bottle out? I would like to face him but in all honesty, by beating Hellboy, I will have proved my point. Hellboy beat Ricky, so why would I want to face an inferior opponent and take a step back by fighting Ricky?

Yesterday Hellboy said that he’s going to knock you out. What’s your response?
Hellboy couldn’t knock out Bernardo. Bernardo defeated Hellboy with very few GNP strikes and two hammer fists before he tapped out. I took everything Bernardo could throw including many hammer fists and still defeated him without tapping. So we’ll see…

It’s often been said that your jaw has not been properly tested and that it is your one weakness. What’s your response to that?
I have fought many warriors and survived to tell the tale. I have been elbowed punched and kicked on the jaw by the former HW champ Norman Wessels, punched and hammer fisted on the jaw by the beast Bernardo Mikixi and punched numerous times on the jaw in two fights against Andrew Van Zyl. These guys are at the top of the division! Sorry, what was the question? My jaw’s not been tested? LOL.

What is your estimation of Hellboy as an opponent?
He is a very gifted man in the muscular department but the last time I checked in today’s day and age, muscles aren’t needed to win fights. Talent, heart and hard work are what’s required to win.

What threat does he pose for you?
I wouldn’t say threat. I would say he has nothing to lose and everything to gain coming into this fight whereas I want my belt back and he is a hurdle for me to achieve that.

Will you be approaching this fight in the same way that you were approaching Ricky?
Both fighters have a boxing background but Hellboy is a bit stronger in the clinch and has a few knees in his arsenal. Both fighters have their own weaknesses. I’ll be working on them individually and incorporating my strengths.

How do you see this fight going?
Definitely not the distance – Win for Ruan “FANGZZ” Potts.

Is there anything personally that you would like to achieve with this fight?
The same as I always aim to achieve, namely “do the best I can do!”

Have things changed for you since losing the title?
I didn’t lose the title, I only lent it to Andrew for a while! Seriously though, a loss is not a loss as long as you learned from it and I have learned a lot. It has made me a better athlete by far.

What have you learned?
I always study my fights, win or lose and ensure I am a better athlete in my next encounter. I have changed a few aspects of my training, improved on a few and I think it has made my all round game much stronger.

Do you have any words for Hellboy?
I won’t be bold enough to say I will knock him out, all I can say is – Welcome to my World – This is MMA – Tap, Snap or Nap!

Is there anything you’d like to add?
Thank you to my fans, friends, family and sponsors for being so loyal and always sticking with me through thick and thin. You guys are legends!