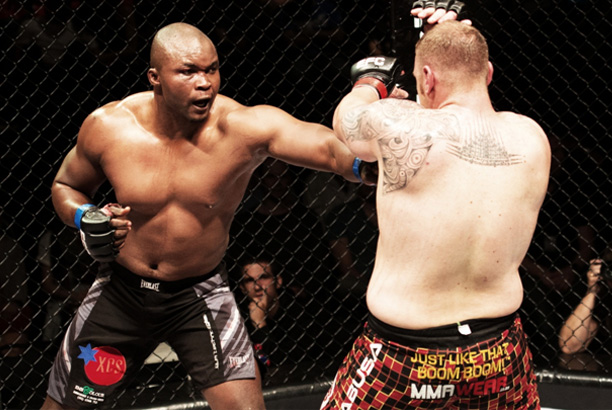 Misholas in action against Sors Grobbelaar at EFC AFRICA 18

Johannesburg (South Africa) – At EFC AFRICA 20 Ricky Misholas controversially pulled out of his fight with Ruan Potts during the event. Here Cairo Howarth, EFC AFRICA president, makes a statement on this saga as it unfolded from his point of view:

“What we understand is Ricky was injured in training on Sunday, in rolling, in a freak accident. We found out about this on Tuesday, the day before weigh-in.”

“They [Misholas’ camp] said to us that they were going to do weigh-in, they were putting him on anti-inflammatories and pain killers and they were going to see by Thursday how he is and whether he can fight. Obviously, from our perspective, that’s too late but they assured us it wouldn’t be a problem. We knew there wasn’t much we could do. We could look for a replacement but it’s really late when you’re looking for an opponent to fight the former heavyweight champion, it’s a tough fight to replace. We didn’t’ tell Ruan [Potts] because we don’t like to tell the opponent that there’s an injury, we don’t want him to know that, so we only tell them when it’s definitely cancelled.”

“The next day the weigh-in went well, Ricky was aggressive, getting in Ruan’s face and after he was tweeting, saying he’s fighting, so as far as we were concerned the fight was going ahead. Our medical team cleared him. There wasn’t’ any break or anything. A lot of our athletes fight injured. Ruan fought with a broken foot and a fractured orbital bone, Costa [Ioannou] has fought with a broken rib, guys fight with injuries, it happens.”

“Ricky rocked up on Thursday, signed in to fight, went in to the change rooms. The first we heard about him having second thoughts was when I bumped into him backstage. He stopped me and told me he couldn’t fight. I said ‘why are we standing in the hallway here talking about this? Why are we not with your whole team? What’s going on? It’s a few hours before you going in there. Are you mad?’ you know? His manager [Grant Oliff] came, and Graeme (Cartmell). They had a meeting and they left that meeting with the understanding that he’s fighting. Okay, great.”

“The next thing I hear is Morne Visser [Team CIT coach] telling Graeme, he’s in the same change room, telling him that he heard Ricky say he’s not going out. Graeme went for another meeting where it was finally said that Ricky’s not fighting. This was obviously all after the event had already started. So from our side we’re not really sure what happened. I don’t think Ricky wanted to fight from Tuesday but his management was pushing him to fight. We would speak to his managers and they would say he’s fighting, it’s just a headspace and they’re sorting it out, and we’d think great. Ricky’s communication obviously wasn’t coming through to us.”

“At this point it hasn’t been decided on what action to take regarding Misholas. We’re going to meet with Ricky and his management in the week and decide on a way forward.”