Hassan fails to appear for the second round 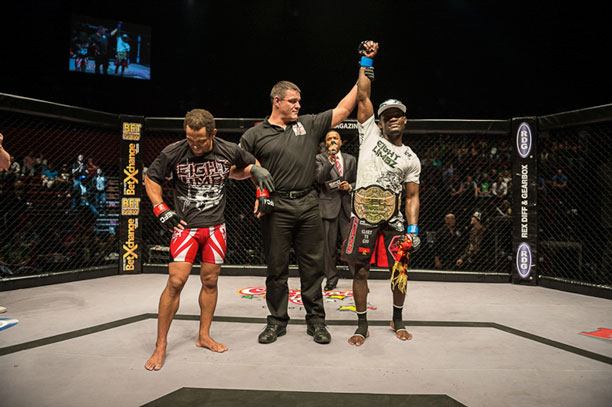 The bout between Pena and Hassan was massively hyped and hugely anticipated. A matchup preceded by unparalleled smack talk, Hassan promised to school Pena. The champion responded that he was looking to hurt the challenger, adding that he would be revealing a new, aggressive incarnation of himself at EFC AFRICA 21.

The champion delivered a dominant and brutal first round, initially making use of stinging leg kicks before clinching with the challenger, taking him down, and controlling with brutal ground and pound. The break between the first and the second revealed torn ankle ligaments for Hassan, forcing him to throw in the towel.

Sors Grobbelaar went head to head with Bernardo Mikixi for the right to challenge heavyweight champion Andrew van Zyl, putting on a devastating display. Many had pegged the fight as a power trial, in which Grobbelaar would have to try to withstand the sheer strength of Mikixi. Instead, Grobbelaar revealed some steaming power of his own, dropping the Angolan with straight, iron hard punches and viciously timed leg kicks. In the third round Grobbelaar succeeded in putting Mikixi down permanently, resulting in the referee diving between them to prevent further damage.

Crowd favourite, and former heavyweight champion Ruan Potts made his first re-appearance in the Hexagon after his EFC AFRICA 18 loss to Andrew van Zyl. His opponent was Egyptian Mahmoud ‘Hellboy’ Hassan, the man with perhaps the heaviest hands on the continent. Potts wasted no time in taking Hassan down and applying a heel hook, which ended the fight in a record 37 seconds, securing Potts the submission of the night award.

Francois Groenewald, a renowned BJJ practisioner faced Gareth Buirski at featherweight. Buirski is well known for his brutal overhand right KO of Markus Taljaard and tonight performed a similar feat after stuffing Groenewald’s takedown attempt, dropping him with a right hook and following up with a barrage of punches that left Groenewald stunned.