The Pride Of Angola

Pena and Mikixi have Angola running through their veins 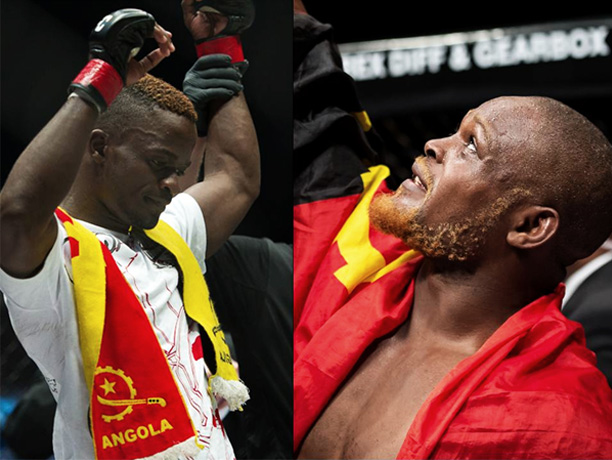 Johannesburg (South Africa) – Undefeated featherweight champion Demarte ‘The Wolf’ Pena and the wrecking machine Bernardo ‘The Black Panther’ Mikixi are two of Africa’s greatest warriors, legends of the EFC AFRICA Hexagon, and both hail from the Southern African state of Angola. At EFC AFRICA 21, July 25, both will be in action against perhaps the toughest opponents of their lives. Today, on the eve of that showdown, both talk about what it means to be Angolan, and to fight under the flag of their birth.

What does it mean to you to fight under the Angolan flag?
Pena: I’m very honored and proud to be representing my country. We have a long history of war and being part of the family that I am* I’m blessed to be able to be called a warrior for my people.
Mikixi: I love Angola and I will always represent. I want to put Angola on the MMA map.

What sorts of feedback/fan attention do you get from Angolan fans? Could you tell us one instance that really stood out for you?
Pena: It’s incredible, a lot more than I could have ever imagined. I was blessed to be back home recently and the number of people that actually know me was astounding. One instance at a mall I heard someone call out “The Wolf”, with a very deep Angolan accent. It was a funny experience but truly gratifying.
Mikixi: I once met an Angolan man here in Johannesburg. He was so happy to finally meet me and praised me for holding the Angolan flag high. He insisted I have lunch with him. He called his friends to introduce me. It felt great. They even campaign to watch my fights.

What do you hope to see in Angola in terms of the development of MMA?
Pena: My biggest goal would obviously be to get more people involved in the sport. It would be great to have more Angolan athletes competing and ultimately doing well. It will take time, but the growth is already underway.
Mikixi: I would like to see the sport introduced and grow. Angolans are good at Jiu Jitsu, Judo and Boxing.

How do you see yourself being a part of that?
Pena: I believe I’ve done enough to at least get people to notice and appreciate the sport back home. Now it’s up to the individuals to start educating themselves about the sport and slowly grow it.
Mikixi: I will be visiting Angola again sometime in the first quarter of 2014. I will then get the youth in my neighbourhood (Lunda North) involved in talks to assist them and get started.

What does it mean to you to be Angolan?
Pena: Only when you know who you are and where you come from, that’s when you are able to pave a way to where you want to go. Being Angolan gives me a sense of belonging, and the freedom to be whoever I want to be.
Mikixi: It means a lot. Here I am in South Africa making them proud through sport.

Do you have a message for your Angolan fans?
Pena: I’d like to thank everyone for the never-ending support. It means the world to me to have my people backing me up every time I enter the hexagon.
Mikixi: I am grateful for their support and will always make them proud.

Do you have any advice for them?
Pena: Know what you want, find out what it takes to get it, be willing to pay the sacrifice, believe you deserve it, and then work harder than anyone else to get it.
Mikixi: Irrespective of the living conditions they must keep away from the streets. They must get involved in sports and encourage everyone in their households.

Is there anything else you’d like to say?
Pena: Thank you to my team, FFM, my family, friends and fans. Also thanks to all my sponsors; Yoka-Sarl, Eight Limbz, Bad Boy and RDG Marketing.
Mikixi: I would like to thank Inter de la police do Luanda for strengthening my sporting foundation. Also to team Rocha Pinto Boxing, Apollo of Team Gueda and team Elite. All of these are Angolan teams that have helped me in my career.

*Demarte Pena is the son of General Arlindo Pena, and the grandson of Jonas Savimbi, founder of UNITA.