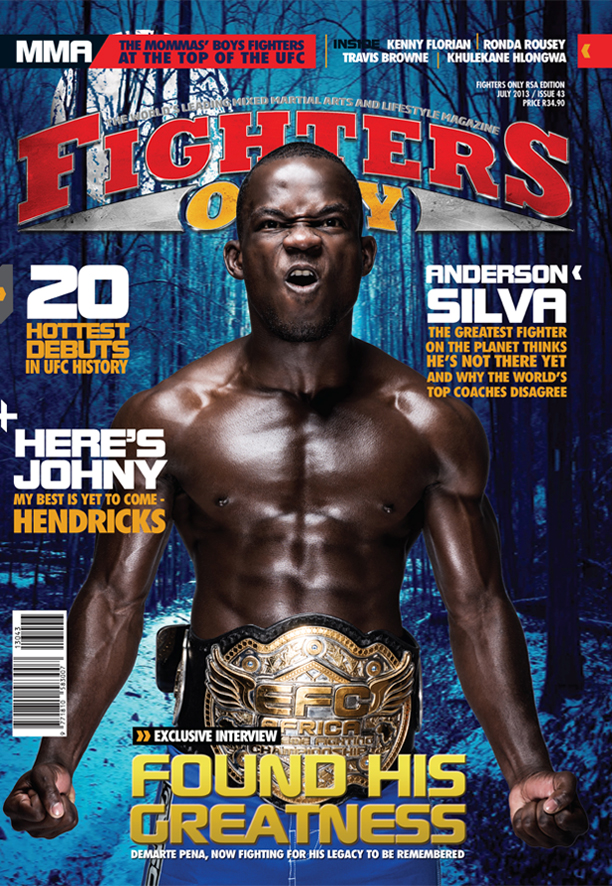 Johannesburg (South Africa) – At EFC AFRICA 19 Demarte ‘The Wolf’ Pena defended his featherweight title in what became the fight of his life. Surviving four knock downs and not being able to see straight for four rounds, the Wolf dismantled Wentzel Nel in an incredible display of single minded will. At EFC AFRICA 21 he defends his title for the fourth time against Abdul ‘Hollywood’ Hassan. This month, on the eve of his record breaking attempt, Fighters Only brings fans an in-depth, no holds barred, devastatingly honest look at the Wolf’s evolution. Below is an excerpt from the full, 8 page feature:

“In war,” says Pena, “ultimately what you want is victory. In terms of the art of war, the craft of war, a victory without actually fighting is best. The art of war is deception. I used to believe that.” “I believed that as long as I kept winning I would be doing alright. I felt that that was all I needed to do. I thought that any fans that spoke of me as boring were just unintelligent. They didn’t appreciate what I was doing in terms of strategy.”
He fiddles with the remote control of the TV, the orange juice finished. VH1 is playing, music seeping through the flat. Abruptly he turns it off.
“The Terrence fight was a joke,” he says, suddenly. “I didn’t see him as a threat. I knew he wasn’t going to do much so I didn’t need to do much. I didn’t put my heart in there. I was hitting him to win the rounds, I wasn’t hitting him to fight.”
“What the fuck are you doing?!” he shouts suddenly, a little later, his hands up in the air mimicking Norman Wessels, his coach, on the night he fought Hawkey. “You are going to lose!”
“At the end of the third round,” says Pena, “I came to my corner and Norman was screaming at me. ‘He’s softening you up! You’re going to lose your title!’” “That fight was ridiculous. Every time we hit each other, or even missed, we would touch gloves like it was a game. He was softening me up. I didn’t know it but I was falling. And it’s because I was playing a game, I wasn’t really there. When I watch those fights today I get angry. I think to myself, ‘why didn’t I work harder? Why didn’t I push more?’”

“It’s all about cleaning my intention,” he says. “In order to clean my intention, I must take it as far as it goes. I am there to fight, I am there to hurt, I am there to kill. I need to accept that. I accept that there is death in the cage because we are two men going to war. Death is a consequence of war.”
“The way I’m training now is different. I’m on guys now, I don’t care. It used to be a case of ‘oh shit, I’m sparring with Costa [Ioannou]’. Now I don’t care if it’s Costa. I’m going in there to do my best, to give everything, to fight.”
“I’m always trying to focus my intention,” he continues. “It’s a challenging process. In training my intention is clear. I am trying to inflict damage. Obviously I’m not being malicious because this is my training partner, but my intentions are clear.”
“I can’t be ruthless all the time. I need to be able to speak to fans, I need to be a good friend to my friends, to help people that need it. It’s a switch. When I switch on, I’m on.”
“This is not a game. No one is forced to fight. Abdul signed willingly. I’m consciously choosing to go there, choosing the potential consequences. He is choosing to put his family at risk. We both choose this.”

Fighters Only SA Issue 43 is on sale at CNA, Spar, Pick & Pay, Exclusive Books, Game and most garage forecourts, now.

EFC AFRICA 21, presented by MusclePharm, takes place at Carnival City, July 25. All 13 bouts can be seen live at Carnival City and at Nu Metro cinemas throughout South Africa. Tickets on sale now at www.computicket.com. Tickets for the live broadcast to Nu Metro Cinemas available soon at www.numetro.com.