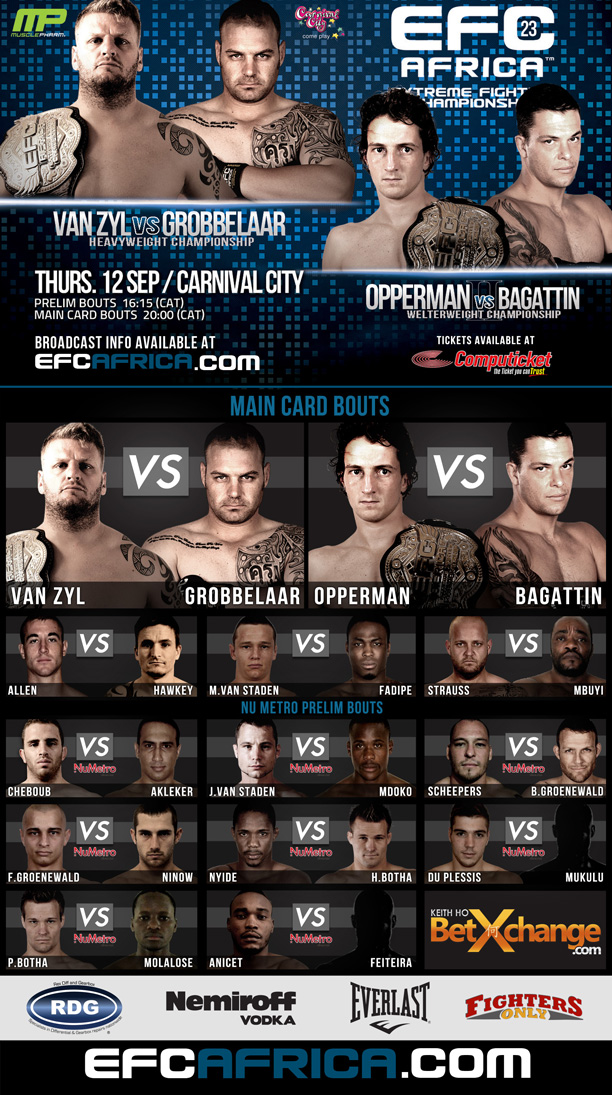 Apart from the two title fights scheduled, where Andrew van Zyl defends his heavyweight crown for the first time against kickboxing colossus Sors ‘Guru’ Grobbelaar, and Michiel Opperman his welterweight title against former British and Commonwealth Muay Thai champion Dino ‘The Lion’ Bagattin, 11 other scintillating bouts play out on the night.

Fan favorite Boyd Allen finally gets his three rounds against Durban bad boy Wesley Hawkey. Allen has been asking for a tougher opponent and Hawkey offers just that. This bout has been postponed twice, both athletes are rearing to have a go at each other, and has massive fight of the night potential – if not fight of the year.

Martin ‘The Punisher’ Van Staden goes head to head with Nigerian born, Ireland based Henry ‘Herculeez’ Fadipe in a matchup that has already erupted on social media. Postponed from EFC AFRICA 22 due to Fadipe not receiving his VISA in time, Van Staden has accused him of ‘hiding’ and incompetence, while Fadipe has responded that all he wants now is the moment where he stands over Van Staden’s unconscious form.

Wilhelm ‘Tiny’ Strauss and Congolese black belt Judoka Vandam Mbuyi complete the main card with a heavyweight clash certain to crunch. Strauss is fresh from an epic, three round fight of the night war at EFC AFRICA 21 and will want a repeat performance, Vandam is a veteran of that same event. There he out boxed Egyptian Mohamed Karim over three rounds and afterward stated that all he wants is more.

The evening’s prelim card, only available for viewing live at the venue, in full HD at selected Nu Metro cinemas throughout South Africa and via live streaming on efcafrica.tv, seethes with the best African talent.

Cheboub and Akleker face off in a highly skilled encounter. Both are known for unorthodox and specialized technique, both are seeing this as the ultimate opportunity to truly test their skills against an opponent as dedicated to the craft of MMA as the other.

Johan van Staden, renowned for his gritty striking and unbelievable toughness takes on the next prodigy to appear out of Cape Town, Sibusiso Mdoko. This man put on a near fight of the night performance against Cheboub last time around, this time he will stop at nothing for the win.

Roelof Scheepers, the monster that destroyed in his debut at EFC AFRICA 22 with a first round annihilation of Egyptian wrestler Koko Hammer, returns for an encounter at a whole new level with Brendon Groenewald. Groenewald submitted heavyweight title challenger Sors Grobbelaar at EFC AFRICA 16, offering a wealth of dangerous experience to challenge the newcomer.

Francois Groenewald and Craig Ninow, both massive talents determined to avenge recent losses, do battle at featherweight and K1 world champion Dricus du Plessis returns for what he terms ‘the chance to lay on a real beating’ against massively rated Takedown Academy debutant Bruno Mukhulu.

In addition both Botha brothers – identical twins and All Africa wrestling champions – go to war at feather and bantamweight with Peter Nyide and Baldwin Mdlalose respectively. Mdlalose is one of only two entering the Hexagon for the first time. Nelson Feiteira is the other, an athlete already trailing a huge reputation, who goes up against Nigerian boxing champion Kanyeba Anicet.

EFC AFRICA 23 presents six full hours of non-stop MMA action from the greatest on the continent. Get your tickets now.