A Battle For The Ages

Smith and McLellan in monster rematch 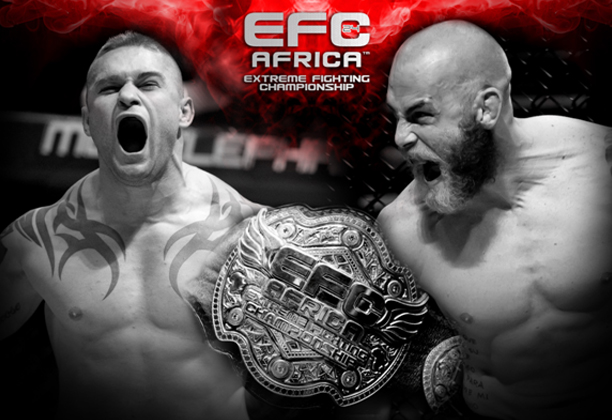 Johannesburg (South Africa) – At EFC AFRICA 24 two African MMA giants clash in a war over a year in the making. Jeremy ‘The Pitbull’ Smith, uncompromising and universally feared middleweight champion defends his title against Garreth ‘Soldierboy’ McLellan, fan favourite and phenomenon of the African stage.

These two first faced each other at EFC AFRICA 12. That night, in a complete reversal of roles, ‘Soldierboy’ was the champion and Smith the challenger. After a tense, technically brilliant and violent battle Smith finally took the upper hand, sinking a deep guillotine to claim the belt.

Since that evening fans have been baying for a rematch. Unprecedented controversy has dogged the finalisation of this fight. Injuries and ill health to both fighters caused subsequent signings and cancellations a record three times, with injuries to McLellan’s knee and Smith’s hand the chief obstacles. The status of each fighter’s health prompted allegations of ducking and avoiding, McLellan repeatedly questioning when the champion would finally agree to face him.

In the time between then and now McLellan has obliterated all challengers in his quest for a rematch, openly stating that he’s prepared to beat absolutey everyone so that the champion has no choice but to face him. Smith himself has had one bout since, a colossal encounter with Darren Daniel that ended in the first and a TKO victory for the champion.

On 10 October they face each other again, this time in a bad blood encounter boiling through both their veins.

In addition Brendan Katz, the megastar that contraversially left the EFC AFRICA organisation in 2010, makes his hugely anticipated return to the Hexagon. He goes head to head with the scorching Gareth Buirski at featherweight. Buirski is fresh from a first round KO of Francois Groenewald, Katz is driven to shatter expectations in his comeback appearance. Neither will be holding back.

Plus 22 more of Africa’s greatest warriors go head to head in 13 unbelievable bouts in total.