‘The Bull’ Retires From MMA 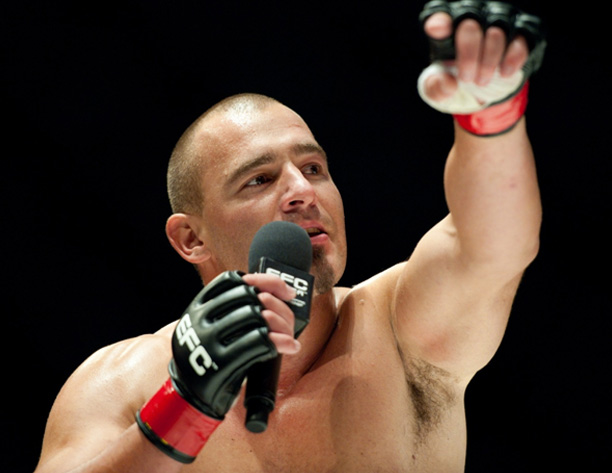 Johannesburg (South Africa) – JP ‘The Bull’ Joubert, the current EFC AFRICA light heavyweight champion, has taken the decision to retire from MMA. Joubert’s reasons for retirement revolve around not being able to put the time he feels he needs to into training, wanting to focus on his business, too.

“I can’t go into a fight not being 100% ready,” the champion said earlier today. “I believe that in order to prepare properly for a championship fight an athlete must train for four solid months, full time. For me, I can’t do that and keep my business running at the same time.”

Joubert powered to notoriety at his EFC AFRICA 15 victory over Norman ‘Chef’ Wessels, taking a severe beating in the first round in which his skull was fractured, but returning in the second to ultimately drop Wessels with a barrage of punches. His performance earned him a global ‘comeback of the year’ nomination, and perfectly illustrated the grit and guts Joubert has always shown on Africa’s greatest MMA stage.

Joubert entered the Hexagon at EFC AFRICA’s very first event in November 2009. There he suffered a debutant’s loss to Shaun Craig after which he was beaten by Bernardo Mikixi. Joubert kept coming, however, thereafter hitting his straps with a two year long, four fight win streak that brought him victories over Africa’s toughest; Danie van Heerden, Gina Ifuki, Jeremy Scheepers and finally Norman Wessels to take the belt.

“It’s a journey that you’ve taken in your life,” says Joubert on his time in the Hexagon. “I always say I’d like to try something and do it to the best of my ability. Stepping into the Hexagon was something I wanted to do. I put action to words and got in there. It’s been a helluva ride.”

Joubert’s skull fracture sustained during his title winning bout ruled him out of competition for six months. Soon afterward he was involved in a motor cross accident, adding a further six months to his period of recovery.

During his year long absence the decision was taken to make an interim light heavyweight title available, which Gideon ‘The Juggernaut’ Drotschie won at EFC AFRICA 20 in a dazzling submission victory over Danie ‘The Pitbull’ van Heerden. With Joubert stepping down full title honors revert to Drotschie.

“I’m very excited,” said Drotschie on hearing the news. “It’s a big honor for me. Of course I would have liked to have faced JP. The guy said I’m an amateur and not a threat to him, but, ja, if he says he can’t fight then he can’t fight.”

Prompted on who he would like defend his title against, Drotschie was quick to respond.

“I want Fraser Opie,” he said. “Either him or Chris Du Pont. I watched Fraser’s fight at EFC 22 and I wasn’t too impressed, but I don’t think he had much of a test either. So I’m looking forward to either fighting him or seeing him in more of a fight.”

“We always hoped to see JP defend his title against Gideon,” said EFC AFRICA president Cairo Howarth. “We know that would have been a great fight. It’s a pity it won’t happen. We’ve done all we can to assist JP but ultimately his decisions are his to make. We wish him success.”