Commander Boy Gets His Title Shot

Pena vs. Ilunga at EFC AFRICA 24 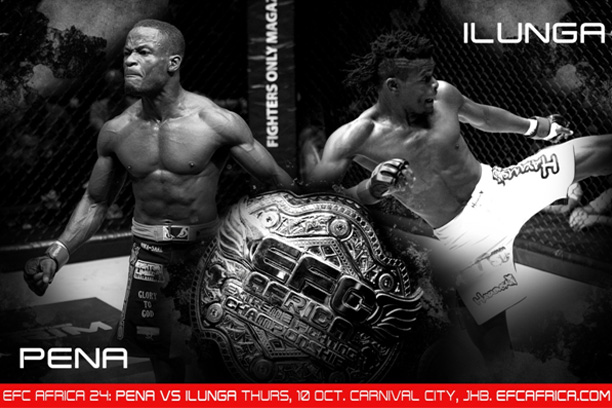 Johannesburg (South Africa) – Alain ‘Commander Boy’ Ilunga has been tearing the featherweight division apart. After a devastating victory over Wesley Hawkey in April of this year he has finally been awarded the ultimate opportunity, a shot at undefeated featherweight champion Demarte ‘The Wolf’ Pena’s title belt, to take place at EFC AFRICA 24.

With an EFC AFRICA record of 4-1 Ilunga has built himself a fearsome reputation. He has dropped two opponents with a single body kick, Koba Iakobidze and Ashley Culvert, and in his last outing pulverized the highly rated Markus Taljaard with kicks that visibly caved the side of the Pretoria tough man’s chest in, reducing him to hobbling bravery before Ilunga finished him with a submission.

At EFC AFRICA 19 Ilunga faced the legendary Wesley Hawkey in a bout that would see him take the step to the upper levels of the featherweight division. Hawkey is the athlete to have given Pena his most competitive fight so far, battling the champion evenly into the fourth round, Ilunga was by far the underdog. He was unaffected as he smashed Hawkey with that same, brutal body kick, rocked him with knees to the jaw then finished him with an iron guillotine.

Ilunga has suffered one loss, an experience that is perhaps the source of his current, electrifying form. At EFC AFRICA 15, in his second outing, he faced Boyd Allen, a man still undefeated in the Hexagon and, incredibly, a fighter yet to lose a round. Allen took the upper hand against the relatively inexperienced fighter, nullifying his already feared body kicks with constant, go-forward pressure and dispatched him by TKO at the start of the second.

That fight left Ilunga with a dislocated shoulder, months of rehab in which he could not throw a punch, and months where he honed his legs into the brutal weapons they’ve become.

Today Ilunga is undoubtedly the top contender in the featherweight division, the biggest threat to Pena’s undefeated position. Today Ilunga is ready for his moment.

“It doesn’t matter to me anymore,” said the champion on his opponent. “Whatever he plans against me is not going to work. I’m not a fighter that he can kick once and I’ll crumble. He’s a good fighter but I’ll be ready for anything. I’m prepared to go through hell to keep my belt. If he wants it, if he really wants it… he’ll have to do more than that.”

“We’re ready,” said Ilunga’s camp in response. “Pena is our toughest challenge so far, but we’re ready. We’re expecting him to shoot, we’re expecting a ground war, and we’re ready for it. We know he can’t match our standup, we want to go to ground. Alain has decided this belt is his, nothing’s going to stop him from taking it.”