Grobbelaar Looking To Beat All Odds

“Andrew can expect the fight of my life” 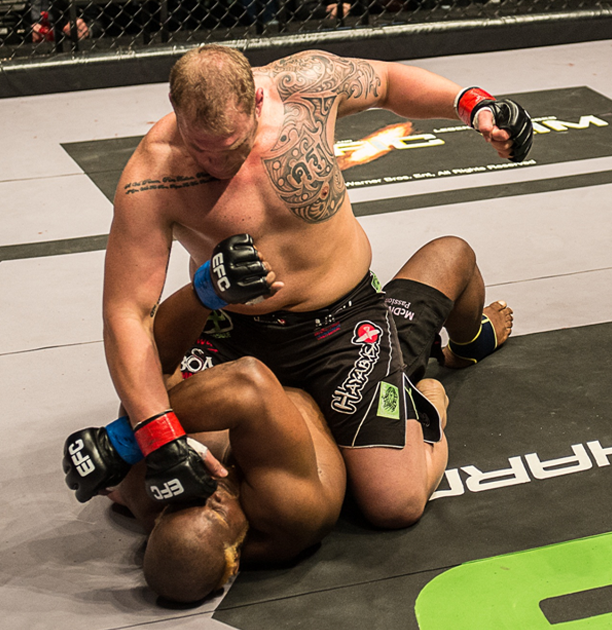 Johannesburg (South Africa) – At EFC AFRICA 23 Sors Grobbelaar faces EFC AFRICA heavyweight champion Andrew ‘One Gear’ van Zyl for the heavyweight title. For Grobbelaar it’s not only a chance to reach the pinnacle of African MMA, it’s the opportunity to realise a long held dream, an opportunity he is prepared to go to the ends of the earth to capitalize on.

“I worked as a PROMMA official at EFC 13 in April 2012,” said Grobbelaar, discussing just how far he’s come in pursuit of the heavyweight title. “That night I wrapped several fighters’ hands. Amongst them were Ricky [Misholas] and Bernardo [Mikixi]. That night I made my decision to try and get into the EFC.”

Still competing as a world renowned K1 fighter Grobbelaar knew the transition would not be easy.

“I had to work hard in the ring first before I could step up the Hexagon,” he said. “The night I lost to Brendon (EFC AFRICA 16, 19 October, 2012), sitting in the upper stands at Carnival City watching the fight between Ruan [Potts] and Bernardo [Mikixi], I told my brother and my wife that I will be fighting for the championship belt before the end of 2013. And here we are.”

Grobbelaar had a difficult beginning to his road to the title, losing his first EFC AFRICA bout to Brendon Groenewald.

“My EFC debut was not a good start,” he agrees. “After that I was on the back foot and had to prove myself to EFC Management. I had to really work hard to show I can compete amongst Africa’s best. Every fight since I was written off before the fight even started. That’s motivated me. Against all odds, throughout all my fights, I have pushed through. Now that I have qualified to compete for the title makes me want to jump out of my skin I feel so honoured.”

Family, says Grobbelaar, a married man and the father of two, is at the centre of his Hexagon success. Juggling MMA and his loved ones has been a difficult process, but infinitely rewarding.

“Early mornings I’m out and I’m back late at night,” he said. “I don’t always catch my kids awake. My wife always stays home and looks after the girls while I’m out there (somewhere in the country/world) training, competing or coaching my fighters at events. Sleep, food and socialising isn’t a sacrifice for me. Not spending time with me wife and children is! She has never had the opportunity to see me compete professionally in any combat sport live as she always has to stay at home. Hopefully that will change some day as well for us. Family is the most important part of my fighting career! I need to know they are okay so that I can be mentally prepared to do what I do.”

On the phenomenal skills that Van Zyl possesses, and the incredible challenge he poses, Grobbelaar is under no illusions.

“As a fighter he’s the full package,” he said. “He has an insane ground game and his stand up is very good. He is strong, accurate and has got lots of endurance. What more do you want? He also has a life outside of MMA as an educator, so that makes him a well-balanced fighter and a real threat.”

Just as in the past, many are doubting Grobbelaar will have what it takes to beat the champion. Grobbelaar, however, is paying no attention.

“There will always be someone that is more hungry and more dedicated than you are, that’s the unfortunate truth,” he said. “A few months ago Andrew was the guy when he won the title from Ruan. No one is unbeatable. Andrew has to beat me to retain his title.”

“I want to prove and show that anything is possible,” he continues. “Never underestimate anything or anyone in all aspects of life. There is a cliché that says “assumptions are the mother of all balls-ups”. On paper and statistically Andrew should take me apart, as was the case with all my previous opponents. Never, ever, underestimate the human spirit and a person’s desire for something. I’m a normal guy that loves this sport. I’m no super hero and don’t want to be one. Andrew can expect a fight on September 12, I will be giving him the fight of my life to take his belt.”