No Compromise At Efc Africa 23 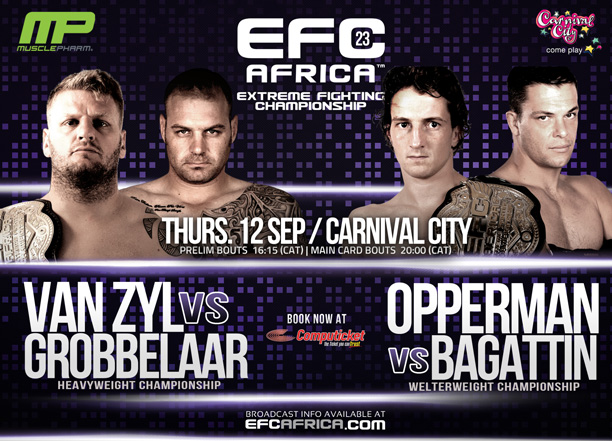 Heavyweight champion Andrew van Zyl has never been KO’d. He has lost only once in his entire career, to the former heavyweight champion. He is an uncompromising phenomenon, a heavyweight with sledge hammer fists and an impenetrable ground game. Sors ‘Guru’ Grobbelaar is a kickboxing colossus, a new force on the heavyweight landscape that demolished Bernardo ‘The Black Panther’ Mikixi, dominating him with crunching strikes and strength no other heavyweight has come close to matching.

Welterweight champion Michiel Opperman, undefeated in the Hexagon, a man on an eight fight win streak, is an athlete none have gone to ground with and survived. Not Martin van Staden, not 1st stripe BJJ Black Belt Jadyson Costa and not Dino Bagattin himself. Bagattin, a Commonwealth and British Muay Thai champion, the man with hands widely regarded as the fastest and most devastating in the division, remembers keeping Opperman pinned down with blistering strikes until a mistake and the subsequent submission. 20 months and countless hours of sweat and blood later Bagattin vows that mistake will not happen again.

Boyd Allen, the Godlike striker many feel could challenge for either the light or featherweight titles, the athlete that has never lost a bout nor even a round in the Hexagon, the man that has finished every opponent placed in front of him, goes to war with Wesley ‘The Young Assassin’ Hawkey. Hawkey is a fighter as well rounded as they come. He is a title fight veteran, an athlete yet to marry both form and opportunity. On September 12 he steps in to create the ultimate test for both.