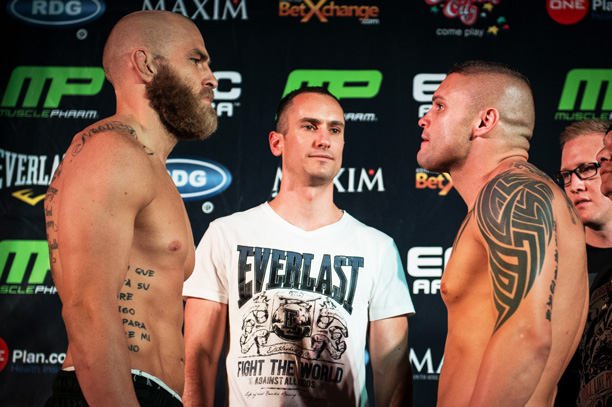 Garreth ‘Soldierboy’ McLellan and Jeremy Smith stare each other down

In the first, the middleweight rematch between champion and fearsome competitor Jeremy ‘Pitbull’ Smith and challenger Garreth ‘Soldierboy’ McLellan, the crowd fell to a hush as the two men stared each other down.

This bout has been 20 months in the making, massive amounts of insult and counter insult have been traded in that time and it showed on the podium. Billed as a battle for the ages, judging by the ominous intent shown, neither will be holding back in tomorrow night’s main event.

“I’m coming to win the belt,” said McLellan in a brief interview after.

Earlier this week Ilunga described the champion as a “stepping stone”, a phrase Pena laughed off at the time. Today there was no hint of a smile.

“I will remain champion,” said Pena in a brief but powerful message.

“This is my time,” was Ilunga’s just as short reply.

The two were scheduled to meet in June of this year, but Misholas pulled out hours before the bout with an injured hand. Potts accused the Congolese athlete of avoiding the fight. Today the big men regarded each other calmly before Misholas refused to shake his opponent’s hand, provoking a quiet grin from Potts and a gasp from the crowd.

Of the 26 athletes that stood on the scale two did not hit their required weight limits.

Mbulelo Swikele and Pierre Botha had agreed to a featherweight bout catch weight limit of 63kgs. Swikele came in over that at 65.30kg. After a negotiation Botha’s camp have agreed to fight at the amended weight.

Nigerian athlete Victor Anyoagu weighed in at 61.90kg, 900 grams over the bantamweight limit. He has two hours to drop the weight.