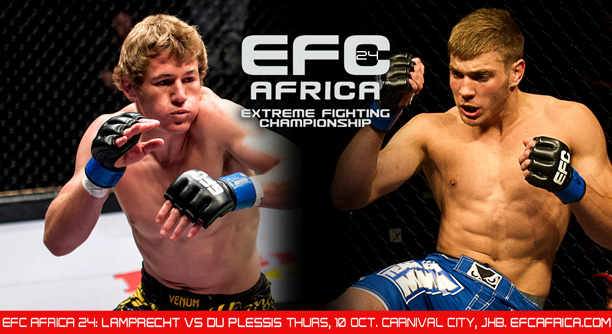 Johannesburg (South Africa) – JC Lamprecht vs. Dricus ‘Stillknocks’ du Plessis is one huge fight. Scheduled to clash at October 10’s EFC AFRICA 24, both these men are set to kick the night’s main card off with a bang.

JC Lamprecht made his Hexagon debut in July of 2012. Little was known about the young Potchefstroom student. Inside the first round he made his intentions clear with a fearsome ground and pound TKO victory.

Two months later he took a step up at EFC AFRICA 16, facing the highly rated Daniel Sinclair. On paper Lamprecht recorded a loss, in reality he took the fight to a more experienced opponent and put on a hair raising MMA display, a performance that netted both men the fight of the night award.

Today, after rediscovering his winning ways with a demolition of Jason Culverwell at EFC AFRICA 21, Lamprecht has married potential with experience. He is ready to advance to the next level.

Dricus du Plessis entered the Hexagon a combat sport prodigy and has yet to be unseated.

In June this year he debuted against Tez Makuebo. Unfortunately that bout ended prematurely with Makuebo suffering a freak knee injury, giving Du Plessis the TKO victory. At EFC AFRICA 23 he returned against debutant Bruno Mukulu and finished by RNC in the first round.

For both men, on October 10 will be the toughest fight of their careers.

Du Plessis has not yet survived an MMA war, wars are Lamprecht’s speciality. Lamprecht has not yet battled someone with the pedigree of Du Plessis, a man whose pedigree is as shiny as they come.

In each other these two have the opportunity to both advance to a higher sphere in the middleweight ranks and to test their skill set at a whole new level.