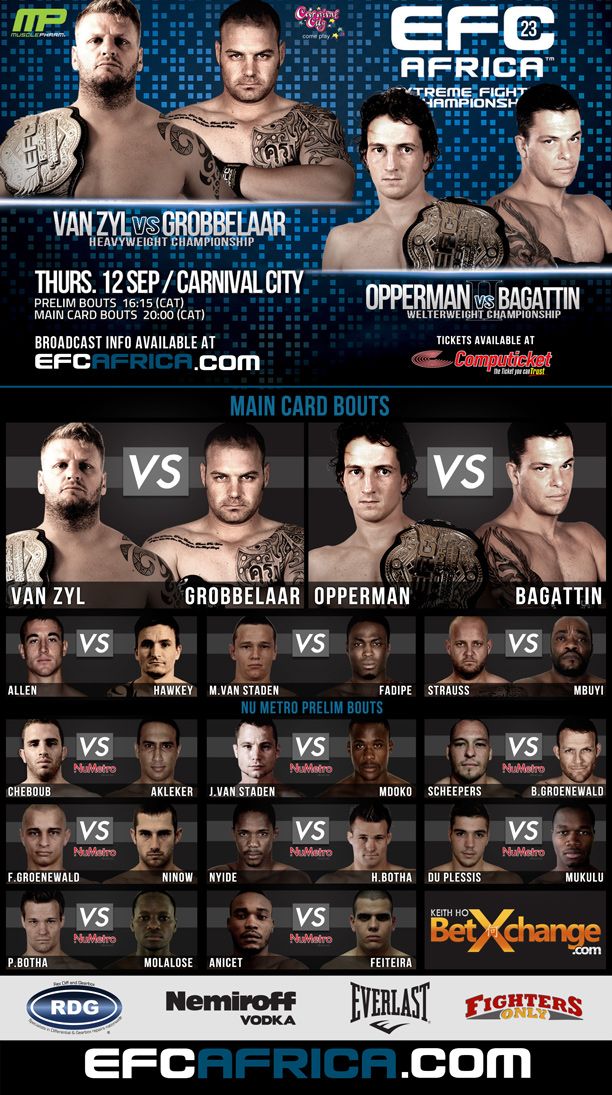 Johannesburg (South Africa) – This Thursday, at EFC AFRICA 23, 26 of Africa’s greatest warriors descend on Johannesburg’s Carnival City to do battle in the Hexagon.

“This card is one of the biggest we’ve seen this year,” said EFC AFRICA president Cairo Howarth, referring to the two huge title fights on display that evening – the heavyweight clash between champion Andrew ‘One Gear’ van Zyl and challenger Sors Grobbelaar, and the welterweight battle between champion Michiel Opperman and challenger Dino ‘The Lion’ Bagattin.

The heavyweight title bout has received an added dimension with both Grobbelaar and Van Zyl fighting for a R5k win bonus to be donated to the cancer charity or cause of their choice, on the back of Grobbelaar initially stating that he is dedicating his fight to Global Child Cancer Awareness Month and Van Zyl revealing that one of his students is a sufferer. Both Van Zyl and Opperman will be defending their belts for the first time.

“Added to the title fights,” said Howarth, “we have the bout between Boyd Allen and Wesley Hawkey, a fight fans have been calling for for a long time, and we’re finally going to see Martin van Staden go up against Henry Fadipe.”

Van Staden and Fadipe where originally scheduled to face each other at EFC AFRICA 21, but a severe, month long bout of flu forced Van Staden to pull out of the matchup.

Rescheduled to face each other at EFC AFRICA 22 controversy struck when Fadipe was not able to secure a travel VISA in time. The Nigerian born, Ireland based athlete had literally been camped outside of the South African embassy in his home town of Dublin for the better part of that week, but to no avail.

Huge smacktalk exploded with Van Staden accusing him of negligence. The two have been at each other since. Their bout promises to be an intense encounter.

With other stars such as Strauss and Mbuyi in action, specialists Cheboub and Aklekker finally facing off, Johan van Staden returning for a go at up and coming sensations Sibusiso Mdoko, both Botha wrestling sensation twins hitting their second appearances and 19 year old WAKO world champ Dricus du Plessis to put in his second Hexagon performance, September 12 is set for one of the biggest nights of MMA so far.

Here’s a list of highlights to look out for in the final lead up to EFC AFRICA 23.

Betting on all EFC AFRICA 23 bouts opens at www.betxchange.co.za

Henry Fadipe touches down at OR Thambo international airport, 06h30.

EFC AFRICA 23 Post Event Press Conference. Commencing 30 minutes after the event and held in Carnival City’s Sports Bar, media and fans are invited to attend and listen to the main card athlete’s views on their bouts, as well as KO, Fight and Submission of the night winners.

How to watch EFC AFRICA 23 live: