In Search Of The Perfect War

Boyd Allen feature in this month’s Fighters Only SA 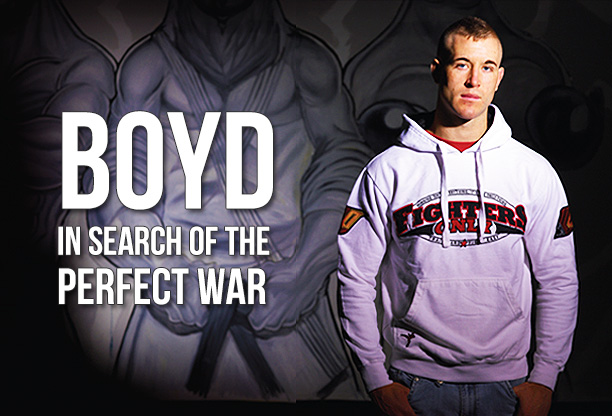 Johannesburg (South Africa) – In this month’s Fighters Only SA magazine Boyd Allen goes in-depth on his career so far, how he’s unaffected by not being able to challenge Demarte Pena for the featherweight title, and that ultimately, what he’s looking for is the perfect war. At EFC AFRICA 23 he faces Wesley Hawkey and may just get it. Below is an excerpt from the full feature:

One morning he was sparring with Norman Wessels, co-owner, co-coach and former EFC Africa heavyweight champion, when the much bigger man took him down, took full mount, and began to drop hardcore ground and pound. Allen covered up, desperately doing all he could to protect himself.
“I looked at the clock and saw there were still three minutes to go. He was giving absolutely everything he could to do damage. All I thought to myself was, ‘don’t stop, don’t let him stop what you love.’”
Finally, the round ended.
“That’s the worst it’s going to get,” Wessels said to him after. “That’s as bad as it’s going to get. If you can handle that then you can handle anyone.” “That was a big moment for me,” says Allen. “It showed me that I can push through. It set a standard. Now, every time I fight Chef reminds me. ‘You can go deeper and darker than he can. Remember that,’ he tells me, every time.”

“I’d like to fight at lightweight, top guys. Don [Madge] would be an awesome test, win or lose it would be a great fight and a great experience. I would like to see how I would do against him. Leon [Mynhardt] is a terminator, he never stops. Jadyson [Costa], with his ground game and his background, you can never write a guy like that off.”
“Wesley [Hawkey, confirmed for EFC Africa 23] is five weeks away,” he continues. “Wesley said he’ll fight me but we must keep it standing. I think it will be his mistake if he believes that.” He smiles. “But I don’t think he does.”

“I still haven’t had the war that I want. I’m looking for that war… I don’t care what the outcome is… I want that perfect war.”

Fighters Only SA Issue 45 is on sale at CNA, Spar, Pick & Pay, Exclusive Books, Game and most garage forecourts, now.