Massive fight in Zulu vs. Gloss at EFC AFRICA 24 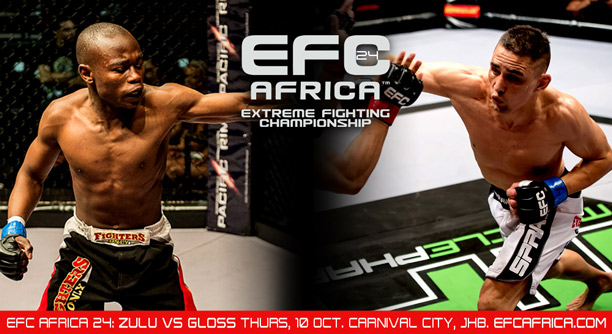 Johannesburg (South Africa) – ‘King’ Leo Gloss, boxing veteran and MMA legend, is one of the toughest competitors on the EFC AFRICA roster. Appearing for the organisation a massive 11 times already he is now scheduled to face devastating up and comer Nkazimulu Zulu, and once again show fans why he’s called the King.

Gloss has carved a reputation with devastating fists. Hailing from the boxing stable of Nick du Randt he has five T/KO Hexagon finishes behind him. Of his remaining six bouts four have gone the distance, revealing a man who either finishes fights or completes them, a tough-as-nails competitor incredibly difficult to put away.

A twice title challenger he is a huge prospect for any athlete, particularly in the stand-up arena.

Nkazimulu Zulu hit his form at EFC AFRICA 21 with a knock out of the night performance against Lourens Botes, revealing the kind of fluid, complete stand up skill that most athletes can only dream of.

At his next appearance, EFC AFRICA 22, he went up against Cedric Doyle. Doyle smashed the smaller Zulu with repeated takedowns and a long grind against the fence. Zulu was not phased. Showing incredible mental resilience he calmly worked a bottom game, despite constant ground and pound, that ultimately netted him a triangle submission victory in the second round.

Zulu is widely regarded as a legitimate challenger for the inaugural bantamweight title, and rightly so. He ticks all the boxes of a complete and deeply talented MMA athlete. A win over Gloss will cement his challenge and add to his growing prestige.

This bout is a pivotal event in the bantamweight division. It marks the return of one of the organisation’s top contenders in Gloss as well as the start of his title campaign. It is potentially the final hurdle in Zulu’s quest to secure his title shot, at this point provisionally scheduled for early next year.