EFC AFRICA pledges R5k to the cause 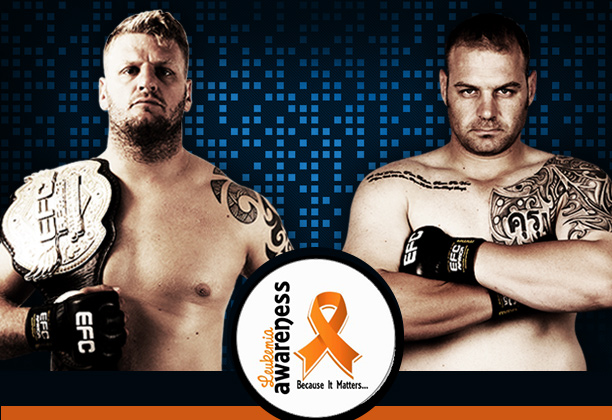 Johannesburg (South Africa) – Sors ‘Guru’ Grobbelaar announced on Monday that he will be dedicating his battle against EFC AFRICA heavyweight champion Andrew ‘One Gear’ van Zyl to the global Child Cancer Awareness Month, using his fight to raise awareness for child cancer and to specifically support the Little Fighters Cancer Trust, an NPO committed to easing the lives of child cancer sufferers and their families.

“I’ve been given this talent. I want to use it to do something worthwhile,” said Grobbelaar in that interview. “This isn’t about me. I hope any other athletes will also feel they can get behind the cause. This is about making a difference, for everyone.”

Once the news was released on social media Grobbelaar’s opponent, Andrew van Zyl, posted a message of support, revealing that, as a teacher, he had recently experienced one of his own students being diagnosed with Leukemia.

“Parktown Boys’ as a school had the unfortunate occurrence of one of our boys being diagnosed with Leukaemia,” said Van Zyl. “Matthew Martins epitomizes everything that it means to be a Parktonian. Before his illness he represented the school in the u16 Rugby and u16 Cricket teams and was fully involved in all facets of the school. He is currently in the Charlotte Maxeke Hospital where he receives treatment. His chemotherapy will take place over a period of three years which is very intensive. He will only be able to return to school in 2014, that is if he responded well to his chemotherapy.”

On hearing that Van Zyl was behind the initiative EFC AFRICA decided to offer an award of R5000 to the winner of the bout, to be donated to the charity or cause of the victor’s choice.

“It’s incredible that our athletes are prepared to get involved like this,” said EFC AFRICA president Cairo Howarth. “Sors has created an opening to do something worthwhile here. We’d like to go with it as far as possible.”

“Sors is doing a wonderful thing,” said Van Zyl. “This is his initiative. I said to him on Facebook and I’ll say it here, I’ll definitely show my support in any way I can. Matthew has a single mother with no financial support from his father. We as a school did a shave-a-thon, a raffle and other fundraising for him but it’s never enough. If I win this fight I’ll be donating to him and his family.”

“At EFC AFRICA 23 Sors and I are going to war. That’s certain,” he continued. “I’m glad it’s now going to mean more than just a personal victory for either of us.”

‘Team Guru’, Grobbelaar’s supporters club, invite fight fans to wear gold armbands on the night. He has printed 1000 of them which will be available at the EFC AFRICA stand for any fan, free of charge. A purely optional donation box to the Little Fighter’s Cancer Trust will also be there.

Should anyone like to donate to the Martins family they are welcome to contact Parktown Boys at info@parktownboys.com