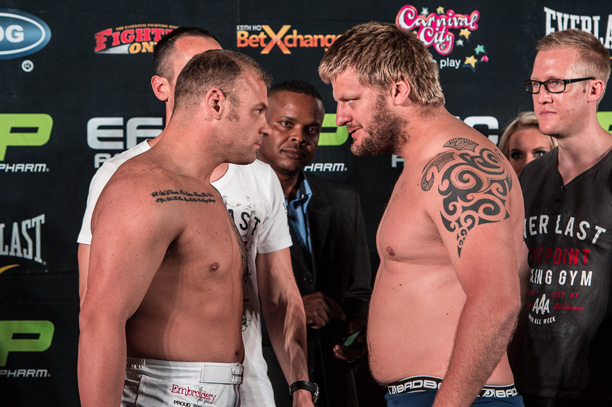 Johannesburg (South Africa) – MMA fans were treated to an explosive 30 minutes at the EFC AFRICA 23 weigh-in this afternoon.

Two title fights headline tomorrow night’s event. Universally feared heavyweight champion Andrew ‘One Gear’ van Zyl defends his belt for the first time against Sors ‘Guru’ Grobbelaar, a kickboxing specialist on a trail of KO victories. Similarly Michiel Opperman, the submissions specialist who is yet to be defeated in the EFC AFRICA Hexagon, defends his welterweight belt for the first time against the man with the fastest hands in the division; Dino Bagattin.

“It’s going to be an explosive fight,” said Van Zyl of tomorrow night’s encounter, “I plan to push him hard.”

“I’ve trained hard, I will be your champion,” added Bagattin.

Highlights of the event were the bad blood stare down between Martin van Staden and Henry Fadipe, and the equally charged face-off between Johan van Staden (Martin’s brother) and Capetonian Sibusiso Mdoko.

Martin van Staden and Fadipe were originally scheduled to face each other at EFC AFRICA 19, but Van Staden had to pull out due to a month long bout of flu. The bout was rescheduled for EFC AFRICA 22, but scuppered when, due to a series of administrative problems, Fadipe was unable to secure his travel VISA from Ireland.

Smack talk exploded on social media with Van Staden accusing Fadipe of negligence, and Fadipe responding with the desire to prove his commitment in the Hexagon. This bout is certain to be a blistering encounter as both have a huge point to prove.

To add to the drama, Fadipe failed to make weight, missing his 77kg target by 500g. (He has subsequently dropped the weight within the required two hours.)

Wesley Hawkey was the only other athlete to hit the scale heavy, missing his target by a mere 350g. A re-weigh after the event minus clothing brought him within the 66kg featherweight limit.