All Eyes On The Bantamweight Division 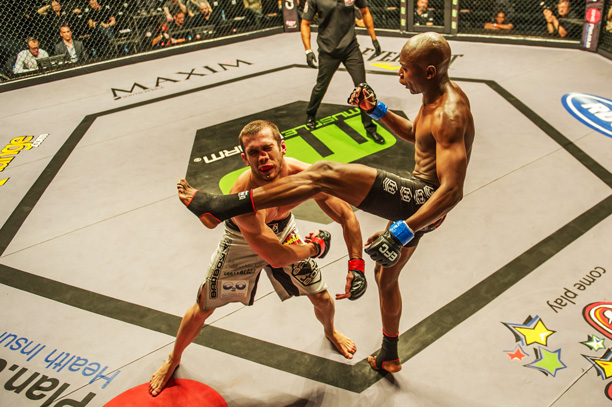 Ninow (left) receives the blow that sent his picture around the globe.

Johannesburg (South Africa) – Last Thursday Nkazimulo ‘Zuluboy’ Zulu and Craig ‘Nemo’ Ninow faced off in a bantamweight bout. Ninow, a relative newcomer to the organisation, took the fight on only three weeks’ notice.

With ten seconds to go in the third round referee Pavan Romkolowan stood the fighters up for inactivity on the ground. Zuluboy, knowing he had to do something definitive in order to take the round and secure a points victory, immediately launched and landed a headkick that had several consequences:

It gave him ascendancy in the round and the victory. It was the cause of a facial injury and flurry of photos that have since travelled the globe, and cemented Ninow as a gritty campaigner in the top level of the bantamweight division.

After receiving the blow Ninow kept fighting, lifting his guard and throwing a punch of his own, before collapsing at the sound of the buzzer only seconds after.

“I knew something was wrong,” he said in a recent interview. “Suddenly I could see in my peripheral vision that my nose wasn’t where it’s supposed to be.”

Zuluboy has without doubt established himself as the man to beat with his dazzling all round skill. Ninow has displayed a level of toughness and winning attitude that marks him as a dangerous prospect to any member of the division.

Ninow is currently at home after undergoing reconstructive facial surgery. He is expected to be fully recovered and fit to fight by the start of next year.

“I just want to get back into the Hexagon,” he said. “I’m not convinced Zuluboy beat me. I want another crack.”

Zulu vs. Ninow is available as a part of the EFC AFRICA 24 PPV package at efcworldwide.com/efc_africa_404.php.