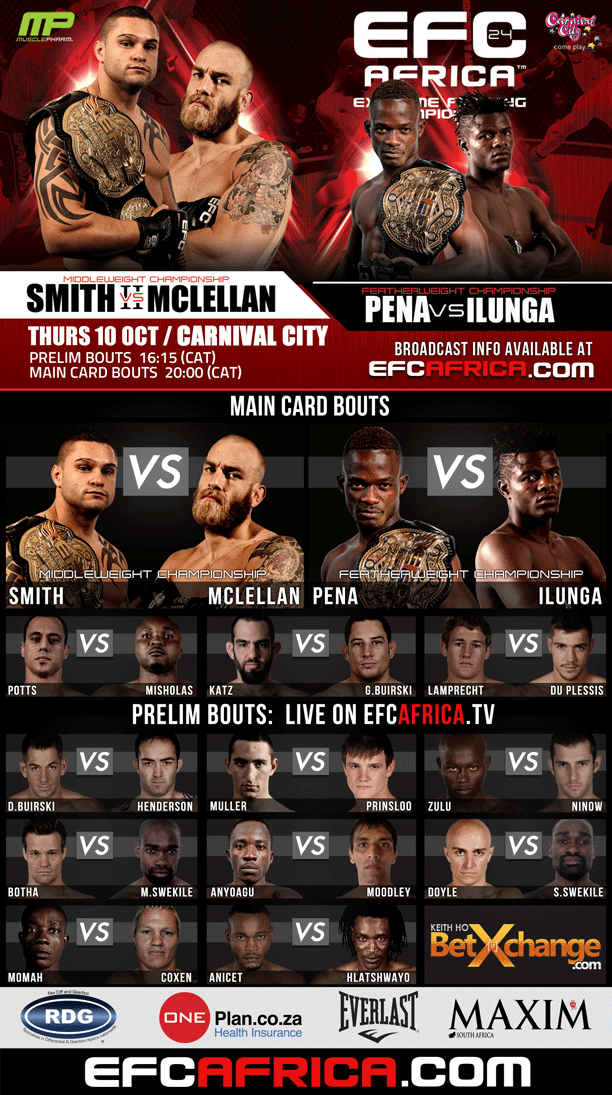 Johannesburg (South Africa) – This Thursday Jeremy ‘Pitbull’ Smith and Garreth ‘Soldierboy’ McLellan enter the Hexagon in a rematch fight fans the world over have been calling for. Demarte ‘The Wolf’ Pena seeks to defend his featherweight belt for the fifth time against DRC danger man Alain ‘Commander Boy’ Ilunga, and 22 more of Africa’s greatest warriors go to battle.

“Smith vs. McLellan 2 is massive,” said EFC AFRICA president Cairo Howarth. “This bout has been on the table for over a year already. It’s finally happening on Thursday.”

“Pena vs. Ilunga is a milestone for us,” added Howarth. “This is our very first title bout not featuring a South African athlete. Demarte is going for an incredible record in five title defenses, as well as being our youngest champion so far. In Alain he faces a huge challenge, though. Commander Boy is dangerous. He’s dropped two opponents with a body kick. He destroyed Markus Taljaard with kicks. This fight is incredibly exciting.”

Added to the main card is the heavyweight number one title contender standoff between former champion Ruan ‘Fangzz’ Potts and Ricky ‘Apocalypse’ Misholas, a controversial bout in that these men were intended to square off at EFC AFRICA 20, but Misholas pulled out at the 11th hour with an injured hand.

Rounding off the main card JC Lamprecht goes up against WAKO K1 world champ and still undefeated Dricus du Plessis. Both men are pushing to break into the upper sphere of the middleweight ranks, both are trailing huge momentum.

Here’s a list of highlights to look out for in the final lead up to EFC AFRICA 24.

Middleweight champ and challenger Jeremy Smith and Garreth McLellan face off on SuperSport Blitz, aired throughout the day.

Betting on all EFC AFRICA 24 bouts opens at www.betxchange.co.za

Former welterweight champion Michiel Opperman appears on Kyknet’s ‘Dagbreek’, DSTV #144, where he gives away two tickets to the EFC AFRICA 24 event, live in studio. Between 7 and 8am.

EFC AFRICA 24 Post Event Press Conference. Commencing 30 minutes after the event and held in Carnival City’s Sports Bar, media and fans are invited to attend and listen to the main card athlete’s views on their bouts, as well as KO, Fight and Submission of the night winners.

How to watch EFC AFRICA 24 live: